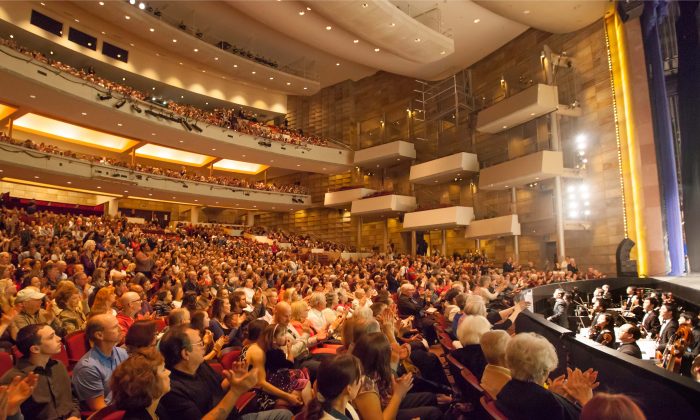 What they saw in the company’s revival of a 5,000 year old civilization through dance and music was “very refreshing, very beautiful,” Mr. Ebersberg said.

In fact, it was beautiful in a way that was “nourishing to the soul,” according to Mrs. Ebersberg. The two attended a performance by the New York-based company at The Buell Theatre on March 6.

“It is truly magical. It is a divine expression of human creativity. It is very, very beautiful,” she said. The dancers were truly skilled and amazing to watch, and the orchestra mixed with Chinese instruments created a rich experience, Mrs. Ebersberg said. And for her, it all came together to tell a story about freedom.

China was once known as the Celestial Empire, with a divinely inspired culture and a people that looked toward the heavens in all matters of importance. From the way colors were used to the attire of different dynasties and the principles that safeguarded society, balance and harmony between heaven, earth, and humankind was present behind it all.

Then in 1949, traditions were wiped out and a mass reeducation of the people came in the form of a communist takeover, and the 5,000 years of heritage was lost.

In Shen Yun’s mission to revive these traditions through the performing arts, Mrs. Ebersberg saw necessity and joy. She saw a way to be at peace with ourselves and our environment.

“It’s a very important message to be brought out so everybody is aware of what is going on in China,” she said. “To restrict people from their true beliefs, their true nature, and try to suppress that, is not good.”

In Shen Yun, she saw people’s “freedom to express their spirituality, which is our true nature.”

“Without us being able to express that, a society cannot thrive,” Mrs. Ebersberg said.