Shen Yun ‘A display of international flair and artistry’ 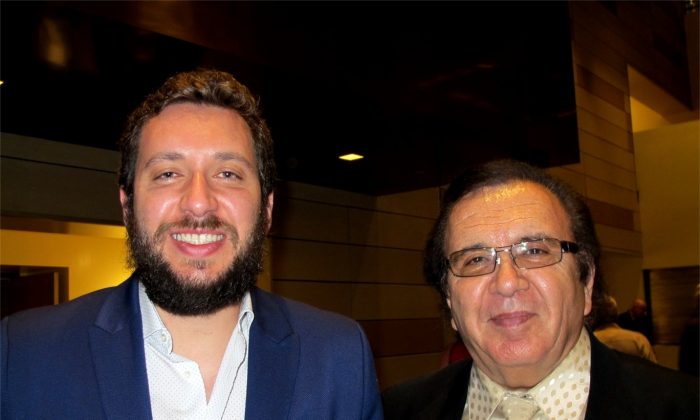 Mayar Zokaei, journalist, sports agent, and doctoral law student, attended the performance with his father Mehdi Zokaei, publisher and editor in chief of JAVANAN Magazine, the largest bilingual Persian magazine in the world.

“I was very impressed by the coordination of everything,” said Mayar Zokaei.

Shen Yun Performing Arts was established in 2006 in New York with the wish to revive ancient China’s cultural values and traditions through the universal language of music and dance, according to the company’s website.

Each year an entirely new program is produced, and four companies tour simultaneously around the world, performing in some 20 countries and over 100 cities.

Mayar Zokaei was fascinated by Shen Yun’s colorful digital backdrop that interacted with the dancers on stage in unique ways. Sometimes the artists appear to leap into the background and fly into the air, or glide back down and jump out onto the stage.

“I was very impressed by the visuals and how they went off the stage,” he said. “It was coordinated with such precise timing that when they went into the screen, they really looked like they were going somewhere to another world.”

Mehdi Zokaei thought the live, full orchestra was “beautiful.” He commented that he had also attended a Shen Yun Symphony Orchestra performance previously.

Both father and son enjoyed how all the elements of Shen Yun meshed together and appreciated the whole experience.

“They are doing a wonderful job,” said Mehdi Zokaei. “Amazing.”

“Putting it together was awesome,” said Mayar Zokaei.

After learning during the performance how Shen Yun is blocked from performing in China, Mayar Zokaei noted some similarities with his own birth country. He also thought the performance had very broad appeal and was one-of-a-kind.

“We are from Iran … a lot of this [kind of performance] is forbidden in our country. But they do it outside of the country, so it’s okay … but we don’t have anything like this in our culture. I mean, you don’t have to be Chinese to enjoy this. You just have to be a lover of international flair and artistry. That’s really what it was. This show was a display of international flair and artistry. I really enjoyed it.”