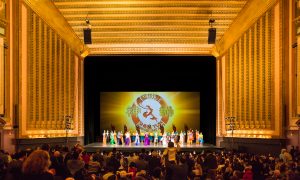 CHICAGO—A soft wind blew in the Windy City this afternoon, not so much referring to the day’s mild, somewhat spring-like weather, but more so to the soft message Shen Yun Performing Arts Touring Company brought with it.

Shen Yun Performing Arts is a New York-based company. It has four dance companies accompanied by full orchestras that tour more than 100 cities in 20 countries each season.

“Through the universal language of music and dance, Shen Yun weaves a wondrous tapestry of heavenly realms, ancient legends, and modern heroic tales, taking you on a journey through 5,000 years of Chinese culture. Its stunning beauty and tremendous energy leave audiences uplifted and inspired,” the company’s website states.

The beautiful choreography, the coordination of all the colors, the interaction between the backdrops and the main stage, and the gracefulness of the female dancers were some of the reasons Mrs. Singh felt the performance was really good.

According to Shen Yun’s website, “Since ancient times, China has been known as the ‘Celestial Empire.’ This refers not only to China’s strength and position as East Asia’s Middle Kingdom, it also captures a more profound meaning, describing a land where the divine and mortal once coexisted.

A message of spiritual salvation was one thing that touched Mrs. Singh’s heart because she felt it’s something people need to hear, culturally. “There were subtle messages,” she explained. “And those subtle messages were very, very important. And whoever wants to get into those messages, you know, you’re able to get the last part of it which was salvation and the good versus the evil.”

She felt that the message of the performance was touching and was delivered very softly, as opposed to the harshness of the reality of everyday life. “There was a certain softness to the whole thing,” she explained. “And, we forget that everything in life is supposed to not be so harsh like that. That scenery was soft, the cloths were soft. Everything was gentle, and it was soothing.”

Some of the story-based dances had a good deal of humor to them.

Although the battles between good and evil are realities in life, Mrs. Singh felt, watching the performance that “It’s nice for the kids to see it in such a funny way because I saw a lot of kids there … So, I think the portrayal—everything, nothing was harsh. Everything was … soft and nice.”