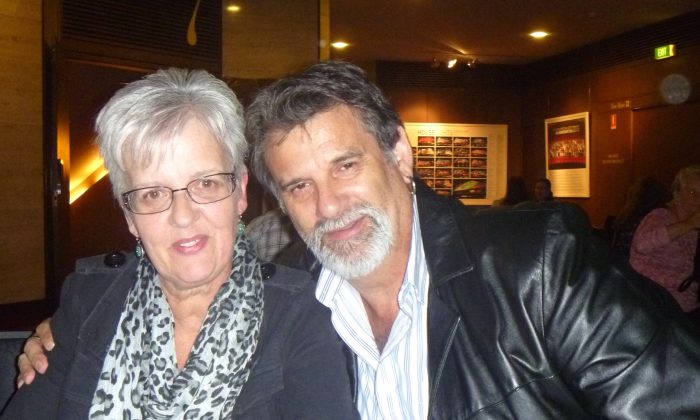 Musician: ‘I liked the music’ in Shen Yun

It was a particularly special occasion for Mr. Allen, who was at the performance with his wife Cheryl, as the couple were celebrating their 39th wedding anniversary.

Mr. Allen said that no matter what ethnicity people are, traditional culture is something that lasts, and people need to become more aware of it.

For 5,000 years, divine culture flourished in the land of China. Humanity’s treasure was nearly lost, but through breathtaking music and dance, Shen Yun is bringing back this glorious culture, according to the company’s website.

Mr. Allen continued, “We have got to remind our people that is what our culture is about–traditional values–that’s been forgotten.”

With a Bachelor of Music, Ethnomusicology and Performance, Mr. Allen was trained in classical music, and plays jazz. He was impressed by the Shen Yun Orchestra, which features a unique mixture of Western and Chinese instruments. “I liked the music because I play music,” he said.

Every costume in a Shen Yun performance is presented with brilliant colors, displaying a splendid spectacle.

“Oh I think the costumes are just brilliant,” Mrs. Allen said, mentioning the colors and the way the materials flow.

She was taken by “the backdrop, how that is incorporated into the show itself,” referring to Shen Yun’s state-of-the-art digital backdrop, which creates vividly animated settings.

Mrs. Allen said it was a great way to celebrate their anniversary.

“I am just very pleased that I came along.”

Shen Yun’s mission is to revive the ancient culture of China through music and dance.

“It’s almost a show about a journey that the Chinese have gone through, over 5,000 years, and it’s quite fascinating to see the changes that have occurred,” said Bob Lucas, a retired business executive.

The dancers are accompanied by the Shen Yun Orchestra, which combines both Eastern and Western instruments.

“I love the music! It’s terrific! It’s joyful, it’s really wonderful,” Mr. Lucas said. “I think the graphics behind the dancers—absolutely brilliant! They sort of bring it to life.”

The animated backdrop is another unique feature of Shen Yun’s performances. It moves and changes with each performance—transporting you from high in the heavens, down to the grassy plains, from tranquil gardens to noisy battlefields.

“Very entertaining. The costumes are beautiful. The dancers are extremely athletic. And it’s a beautiful sight to watch.”

As well as being visually entertaining, Shen Yun also seeks to educate audiences on the values and ideals of ancient China through to today, portrayed in the stories told on stage.

“I just love the energy and enthusiasm and the way it depicts your history,” Mr. Lucas said. “I think what I have learned is that the Chinese people have been through a lot of struggle, a lot of hardship in their history, but they have come out stronger and work together to overcome the struggles that they have faced.”

“I think it’s quite wonderful, I think it’s terrific what they have been able to achieve. And I think it’s very sad though that you can’t perform in your own country … as well as allowing us to enjoy it.”

Shen Yun continues its Australia tour in the Gold Coast, Queensland, with performances from April 24-27.