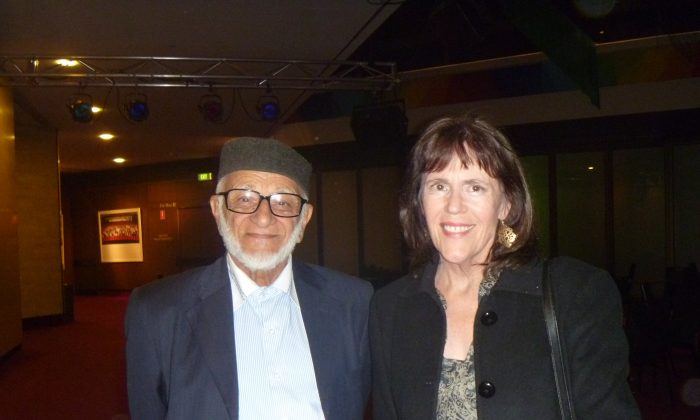 ADELAIDE, Australia—Leader of Adelaide’s Islamic Arabic Centre and Leader of the Muslims in Adelaide, Sheik Sulaiman Noureddine and his wife, lawyer Marie Taylor were at the Shen Yun Performing Arts presentation on Sunday, April 20.

Held at the Adelaide Festival Theatre, Mr. Noureddine said the singers performed to their maximum. “So wonderful,” he said.

“The primary trait that distinguishes the singers of Shen Yun is their use of bel canto technique to sing Chinese text,” the Shen Yun website explains. “This means that the singer must, while continuing to meet the challenges inherent in bel canto technique, retain proper Chinese pronunciation and diction. Today, these singers’ ability to do this is unparalleled.”

Sheik Noureddine said, “Even the dance, even the way they perform the action. And then also their stories … even though they are doing [everything] their [own] way, I can understand what they do.”

The website states, “Mortals and divine beings merge on stage as one. Principles such as benevolence and justice, propriety and wisdom, respect for the heavens, and divine retribution, all come to life, washing over the audience. Originating from Confucianism, Buddhism, and Taoism, these ideals are the essence of traditional Chinese culture.”

Story dances are integral to a Shen Yun performance and the dance, Mongolian Chopsticks, had the Muslim leader’s attention.

“Against a vista of endless blue sky, Mongolian men are gathered in companionship,” the program book says.

Ms. Taylor also thought the Shen Yun performance was “brilliant and energetic” and the dancers were “very, very skilled.”