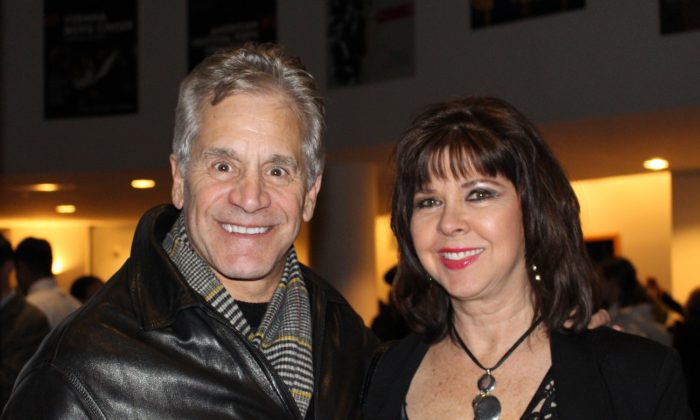 FAIRFAX, Va.—Dan D’agostino is the Senior Vice President for a division of Pacific Western Bank and Barbara D’agostino is the Executive Director for a senior living community. The couple came to see Shen Yun Performing Arts on Jan. 16. in Fairfax, Virginia. The couple had heard of Shen Yun before, but this was their first time seeing the performance.

“I didn’t know if I was more into the dancers or the costumes or the backdrops,” she said. “They were all stunning,”

“I was just going to say the orchestra was phenomenal,” said Mr. D’agostino. Shen Yun Orchestra blends the sounds of East and West by incorporating Chinese instruments into a symphony orchestra.

“Really amazing. They did a great job. It was clear. It was articulate in the shape of the music and the form, and it seemed to go with the dancing as well, they complement one another quite well,” he said.

One of the instruments caught Mr. D’agostino’s ear.

“I particularly liked the harp,” he said. “She was very good and I saw her tuning it up and it stood out in a number of the [pieces].”

The color and the dancing also stood out to Mr. D’agostino and he appreciated the athleticism.

It was the couple’s first time watching Shen Yun, but Ms. D’agostino said that it will probably not be the last.

“I would come back, definitely,” she said. “And they stated that too, that it changes every year.”

Each year Shen Yun creates a new production, drawing new stories from the long history of legends and lore of China.

“It was somewhat educational for us, I think, both my wife and I, because we had never been to China,” said Mr. D’agostino. “We didn’t know a whole lot about their culture, and just some of the themes that they had in the various dance routines was educational.”

Chinese civilization goes back 5,000 years, and traditional Chinese culture is said to be divinely inspired.

Ms. D’agostino said it was also educational in that she noticed the spirituality of the culture, and “a lot of honor and respect towards the gods.”

“That was a feeling that I got,” she said.

Ms. D’agostino had just one word for friends who might be thinking about seeing Shen Yun: “Go.”

With reporting by Emel Akan and Carrie Gilkison.