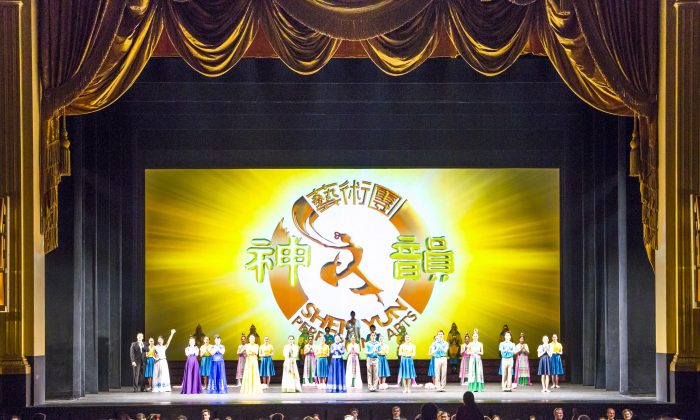 “Sort of a variety of different dances talking about and displaying different things from Chinese history which was informational and very artistic,” he said.

Chris saw the show with his wife, Christen, and both noticed that the dancers on the stage often added percussive elements to the music with stage props, such as chopsticks or drums.

“Shen Yun dances have featured a range of unexpected props, each telling a story,” explains the Shen Yun website. “In ancient China, drums were seen as all-powerful magic weapons, and were first used in battle.”

But particularly memorable for Chris was the theme of compassion in the show.

“I thought the one was interesting where they showed compassion,” he said about a piece called The Power of Compassion. “The Chinese [regime] coming and trying to shut down meditation and then converting the policeman to open his eyes and appreciate compassion. I really enjoyed that part.”

Chris said that Shen Yun was a great experience and “certainly well worth seeing, very different from any other performance I have seen before.”

‘I was almost in tears’

Also at the performance was Janet Dillups, a banker, visiting San Francisco from the New York Metropolitan area.

“I thought the show was marvelous. I’m very thankful to be here,” said Ms. Dillups. A special gift from her in-laws brought her to the performance.

“I thought the stories that they told were wonderful and it was great to see something that I’ve never seen before,” said Ms. Dillups. “The Chinese history and the way it came about.”

While dance makes up most of a Shen Yun performance, music is also a critical component. The Shen Yun Performing Arts Orchestra combines instruments from the East and West to make a unique but harmonious sound. There are also solo singing and musical performances.

One instrument solo, the two-stringed erhu, almost moved Ms. Dillups to tears. “I love the [erhu], that was so emotional. I was almost in tears, the way she played I just closed my eyes and listened.”

Sometimes known as the “Chinese violin,” the erhu has a 4,000-year history. “I really enjoyed that one, because it was an instrument I had never heard before and it had so much emotion to it,” said Ms. Dillups. “I could feel her playing the song, that one really touched me. It was wonderful.”

Supporting the dance pieces and bringing them to life are animated digital backdrops. “The backdrops are as grand as they are intricate. So remarkably true to life, they allow you to forget where you are, and journey to another place and time,” explains the Shen Yun website.

“That was amazing,” said Ms. Dillups of the backdrops. “The timing. They made you believe that these people were coming in from the backdrop. And when they dropped down and came up, it was so alive.”

Ms. Dillups said that she nearly felt transported to ancient China. “As I watched them dance, the expression of all the dancers is almost reliving or being in China. I think it’s very heartfelt,” she said.

This form and feeling comes from the dancers’ training. The Shen Yun website explains: “Classical Chinese dance has three main components—bearing, form, and technical skill. Bearing is the translation of a specific Chinese term (yun) that can best be described as a particular inner spirit.”

“When I go back east, I’m going to take some of my girlfriends, and I have kids too, I may take them also, because I think they will really enjoyed it. It was fantastic.”