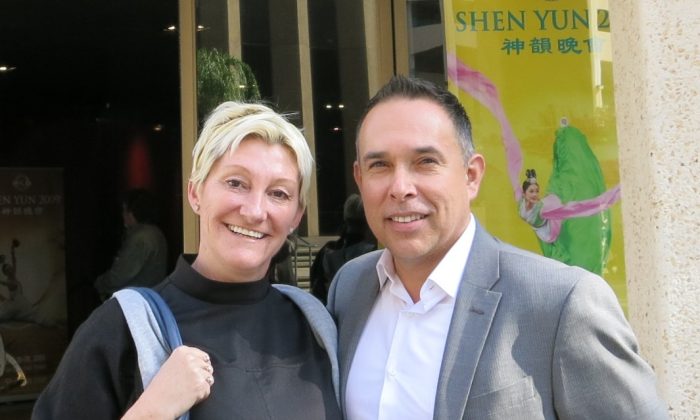 That’s why Agustin Valadez, a psychotherapist who works for the County of San Diego, said if you want to see what he saw on Sunday, March 27 at the San Diego Civic Theatre, you’d better hurry and “find it somewhere.”

“I really recommend it,” he said.

The message I got from that [is] we need to educate our youth about what’s going on in the world.
— Agustin Valadez

He said he and his wife Sarah Valadez, a cosmetic trainer for a cosmetic company, would of course be back next year as well.

Mrs. Valadez was a professional ballerina in London for many years in her youth, and she greatly appreciated the artistic side of Shen Yun. She said everything about the performance had been beautiful.

“I thought the costumes were beautiful. The dancers were very professional,” she said. “I’m very inspired to go back and do ballet again, and also tell schools that art is still very important in the schools for the children, that they should not stop teaching music or dance. It’s very important.”

Shen Yun Performing Arts was founded in 2006 with a mission to revive true, traditional Chinese culture, which is said to have been a gift from the heavens.

“The part that I like about it the most is the history,” said Mr. Valadez. “I think that it brings something new, that people are not aware of.”

The dances of Shen Yun stories and legends from ancient China showcase the many different ethnic groups of the vast country. The performance even addresses modern Chinese history and the persecution of spiritual and religious groups, which is counter to the long spiritual history of China.

“You appreciate what we have here in America, freedom,” said Mr. Valadez. “The message I got from that [is] we need to educate our youth about what’s going on in the world. We need to open up their eyes to the possibilities of helping other cultures having the same privileges that we do.”

‘The most splendid thing that I’ve ever seen’

From the moment it began, homemaker Maria Shaw, also in attendance on Sunday, felt it was incredibly touching.

“I think it’s the most splendid thing that I’ve ever seen,” said Mrs. Shaw, looking lovely in an Asian-style embroidered dress. “I’ve always wanted to come … I told my husband, I don’t need or want anything for Christmas, all I want is tickets to go to Shen Yun.”

It was an easy request to fulfill, her husband said.

“So from now on,  I will not miss, not even a single show, and I will bring my family.”

She said she had never seen anything like New York-based Shen Yun.

“I felt like I wanted to cry,” she said. “The scenery—so magnificent, it’s just like being there.”

Mrs. Shaw said she thought the hosts that introduced each piece were wonderful, and she also loved how the performance could tell the stories so clearly through music and dance. She was very connected to the performance and felt it had a divine message.

“It’s just like being in heaven, really,” she said. “The colors, the performance, everything is just so gentle and so sweet.”

Mrs. Shaw said she would recommend it to everyone, including to those from China, where today it cannot be seen.

“I think the whole thing is so beyond belief, you can’t even explain. You can’t express how one feels,” she said. “It’s absolutely incredible.”