Scientist Astounded by His Discovery of Shen Yun 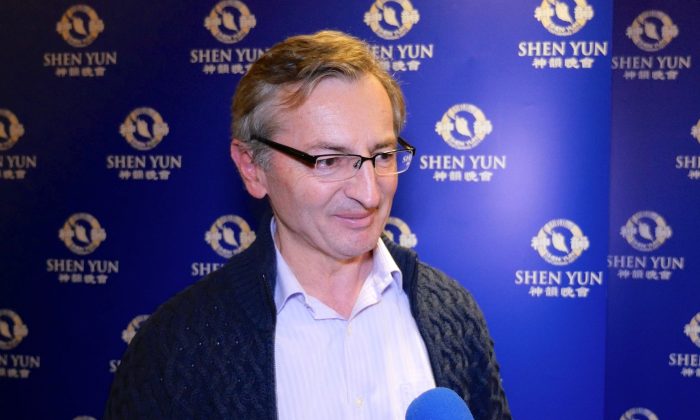 BOSTON—Mark Plavsic is a senior director at the pharmaceutical company Sanofi Genzyme. He deals with science and biotechnology most of the time, but when he’s enjoying entertainment, he does it at one of Boston’s most prestigious theaters, the Boston Opera House.

On the night of Jan. 22, Mr. Plavsic was astounded to discover traditional Chinese culture at the opera house in the form of a dance and music performance. He watched Shen Yun Performing Arts present 5,000 years of lost Chinese culture on stage.

The two hour program consisted of ethnic, folk, and classical Chinese dance all to the accompaniment of a live orchestra. Every dance was brought to life with the digital backdrop and the dancers’ ornate costumes, which all made an impression on Mr. Plavsic.

Having worked for many years in the field of biotechnology, Mr. Plavsic had seen much in his life. Before he worked for Sanofi he also worked at Astra Zeneca and other pharmaceutical companies. Before that Mr. Plavsic worked as a veterinarian and also as a virologist.

But on Friday night, watching Shen Yun, Mr. Plavsic couldn’t wait for intermission to end so he could see the second half.

“I haven’t seen anything like this before,” Mr. Plavsic said. “It’s so, so amazing.”

“It’s a feeling of pure awe, joy. It’s awesome,” Mr. Plavsic said. He added that the company’s name is very appropriate for the type of performance.

On the company’s website, Shen Yun is translated as “the beauty of heavenly beings dancing.”

“It’s something that you just have to see, you can’t explain, especially the joy and the inner feelings of these people. It’s really spectacular,” Mr. Plavsic said.