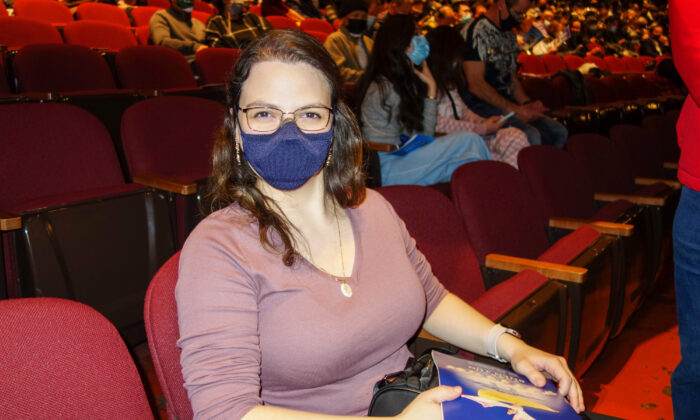 Leticia Fais at the Shen Yun Performing Arts performance at the Center for the Performing Arts, in San Jose, on Dec. 22, 2021. (Lily Yu/The Epoch Times)

SAN JOSE, Calif.—Artists in the performing arts industry have been deprived of the stage during the pandemic and audience members have missed their presence. One of the things that pianist Leticia Fais has missed the most during the pandemic is to see people dancing, and through Shen Yun Performing Arts, her wish came true.

“This is an experience that I am extremely grateful for,” she said. “I love watching dancing and seeing a lot of people dancing with such high technique and artistic commitment. This is one of the experiences that I missed the most during quarantine.”

Although Fais came for the dances, she was able to experience more than just the technical aspect of it.

“I see a lot of connection between people and commitment, not to technique, but to everything that technique provides, because technique is just a means, and I see that those artists know this.

“I felt a lot of harmony in everything and I don’t know how to put it in words yet,” she said. “I can see how deep and true this is for the people. This is really something honest and that comes from the heart.”

Enjoying the same performance this evening was Arnout Ter Schure, a hedge fund manager, and his wife, Hana Demchenko, a plastic surgery nurse.

Ter Schure complimented the dancers on their flawless performance. “[The dances are] amazingly choreographed and amazingly executed. If you were looking for a flaw, I don’t think you’ll find any! It’s amazing!”

The couple reflected on the deeper thoughts that New York-based Shen Yun invoked in them.

“We were so busy in our daily grind, and just trying to get through our days and with everything that’s going on in our lives right now,” Ter Schure said. “I think it’s really nice to get reminded of these other aspects in our life that are also important for our well being and I think that shines through on stage.”

Shen Yun‘s mission is to revive 5,000 years of Chinese civilization. The dances and stories found in Shen Yun are based on traditional Chinese literature and culture, found in China before the Chinese Communist Party.

Many audience members find that they understand more about China and classical Chinese dance after seeing Shen Yun.

“I learned that China has a long history of dance. There’s different types of dance, the cultural, the ethnic, but it’s also nice to be exposed to the current situation in China as well, with certain practices that are forbidden,” she said.