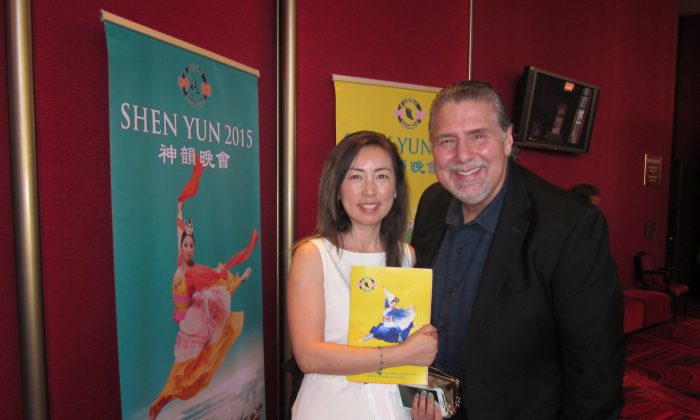 SAN DIEGO, Calif.—There is something about ancient China that inspires us even today, regardless of era, or cultural background.

“This is actually the second time I’m seeing it,” said Dr. Yphantides.

New York-based Shen Yun tours around the globe every year to bring this ancient culture to the world. With four separate touring companies, the performing arts company is bringing the traditional, divinely-inspired Chinese culture that was once almost lost to the world with nearly 100 stops each season.

Dr. Yphantides said he loves and appreciates Chinese culture, as does Ms. Huang, who attended the performance with him.

“I have a very strong Greek cultural legacy, and I’m very proud of my Greek historical tradition,” said the doctor. “I appreciate the positive aspects of culture and how unique and diverse the world is, and I think this show captures the historical, cultural essence of China.”

Originally from mainland China, Ms. Huang said she had always wanted to see Shen Yun, as the name of the company evoked a promise of a glimpse into an era past.

China was once known as Shen Zhou, the Divine Land, Ms. Huang explained. “Shen” means divine, and Shen Yun translates to something along the lines of “the beauty of divine beings dancing,” according to the program. Ms. Huang had hoped, in Shen Yun, to see what the divinely inspired culture was truly like. After all, a performance like Shen Yun cannot be seen in communist China today.

Showing the essence of the traditional Chinese culture, as Dr. Yphantides and Ms. Huang hoped to see, is exactly what Shen Yun aims to do.

Accompanied by Shen Yun’s unique East-meets-West orchestra, themed story-based dances and ethnic dances take the audience on a journey through the 5,000 years of Chinese culture.

Shen Yun also addresses modern-day Chinese history and the spiritual and religious persecution experienced by groups such as Buddhists and practitioners of the spiritual meditation Falun Gong.

“I think that many cultures have a very rich, spiritual history, and at times, they get oppressed,” said Dr. Yphantides. “It happened in Greece with the Turkish influence, but then there was a recurrence. And for many cultures, faith and spirituality is part of what protects and maintain the cultural integrity.”

“I am a very spiritual person,” he said. “And I have hope in the ability for cultures to get along better, especially when they have an appreciation for each other’s history.”