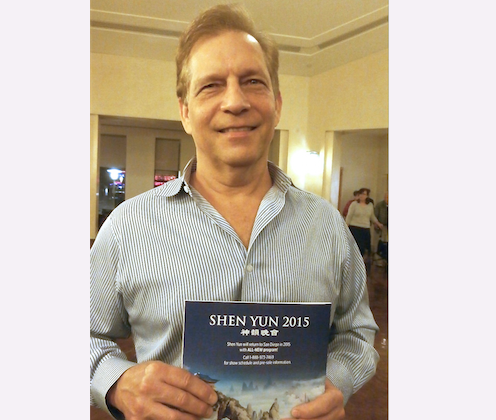 Bob Thomas at the Shen Yun Performing Arts performance at the California Center for the Arts on Feb. 26, 2014. (Gisela Sommer/Epoch Times)

ESCONDIDO, Calif.—Shen Yun Performing Arts’ New York Company graced the stage at the California Center for the Arts, on Feb. 26, with its opening performance, starting its 5-performance run in San Diego that will conclude on March 2.

“I really enjoyed this show,” said Bob Thomas, owner and executive of companies in the financial sector, who saw Shen Yun on its opening night.

“I couldn’t believe all the different costumes and how well choreographed it was. I especially like how they blended in the background screen with the stage; it was unbelievable,” Mr. Thomas said.

Shen Yun is independent of the Chinese regime, and since it is based in New York, it enjoys artistic freedom, and is able to present China’s true divinely inspired culture. The company is currently not allowed to visit China.

Mr. Thomas said he appreciated the spirituality of the performance and that it was unfortunate that such a performance could not be seen in China.

Leo Nicolette, an advertising executive who also saw the performance on Feb. 26, said, “This was a wonderful show, fantastic. It is definitely the most colorful, fantastic choreography. They were just impeccably aligned.”

Mr. Nicolette said he appreciated the thread of good overcoming evil throughout the performance.

“What really impressed me is they talked about the Lord Creator and the divine, and they really teach togetherness and good and evil,” he said. “I was very impressed and I will definitely come back.”

Chris Saritat, a musician, singer and songwriter, grew up in Thailand and came to the United States about 10 years ago. “The show is great, the graphics, the costumes, and the creative ideas,” he said after seeing Shen Yun’s performance on Feb. 26.

Mr. Saritat also liked the spiritual elements of Shen Yun, and said being from Thailand, the performance had a familiar feel.

“It is great to preserve the culture, he said. “I think it is important to teach traditions to the young performers in the performing arts.”

Irene Brandys, chief scientific officer with a biotech company, who saw Shen Yun on Feb. 28, had high praise for the company.

Ms. Brandys said she enjoyed the spiritual values and would definitely recommend the show to others.

“I like mostly [the] dance but its general presentation is great,” she said.

With reporting by Jane Lin, Gisela Sommer, and Sarah Le