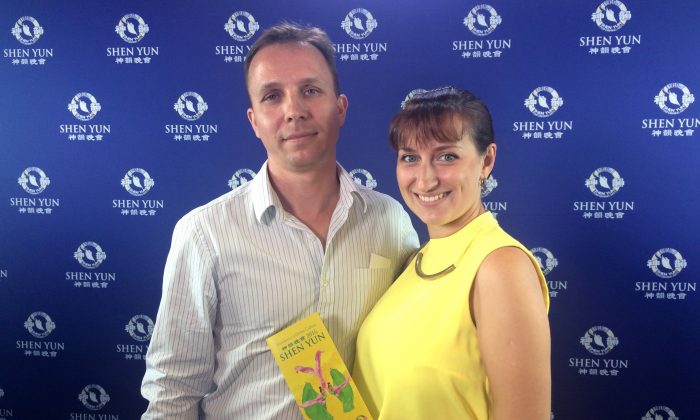 Russian-born Max Vlasov, and his wife Alex Vlasov, were in the audience enjoying the New York-based classical Chinese dance and music presentation.

“Just the music and the dance, quality of the costumes, and the music. Very impressive,” said Mr. Vlasov.

“I was also surprised by the animations on the background screen, how people jump in and jump out of the screen. I didn’t expect that, that’s quite amazing.”

With state-of-the-art graphics technology, Shen Yun’s digital backdrop team creates vividly animated settings, extending the stage and transporting the audience to a world where heaven and earth are one, the company’s website says.

“We have Russian origins, Russian background in ballet is very famous, and this [classical Chinese dance] is really impressive.”

Her husband, who has visited China, was disappointed to learn that Shen Yun could not perform there.

“Even in China I wouldn’t be able to see anything like this, so I’m happy to see the other side of the fence,” Mr. Vlasov said.

Since the company’s launch in 2006, Shen Yun’s mission has been to revive China’s authentic history, and Mr. Vlasov deemed it a big success.

“It looks very professional, very bright and people can get the message.”

His wife added: “The costumes are amazing, so bright and so cultural, and the music is perfect.”

Mr. Vlasov said he did not realise classical Chinese dance is so acrobatic, as explained by the show’s emcees.

“I was surprised these moves [came] from actual dance, not from acrobatics. I would imagine it was the other way around,” he said.

In fact, many different dance forms, physical arts, and sports around the world have adopted the techniques and flips of classical Chinese dance, according to the Shen Yun website.

Mr. Vlasov thoroughly enjoyed the humorous antics of the monks in a dance story called, “Monks and the Red Guards.”

In the late 1960s, the Chinese Communist Party launched a huge movement known as the Cultural Revolution. In this dance story, Red Guards arrive at a monastery to drive out the monks. But they soon discover the monks possess supernatural martial arts skills and will not be moved, according to the program.

“Just the humour,” Mr. Vlasov said. “It’s a good combination of all–humour, history–it’s a good mix of everything.”