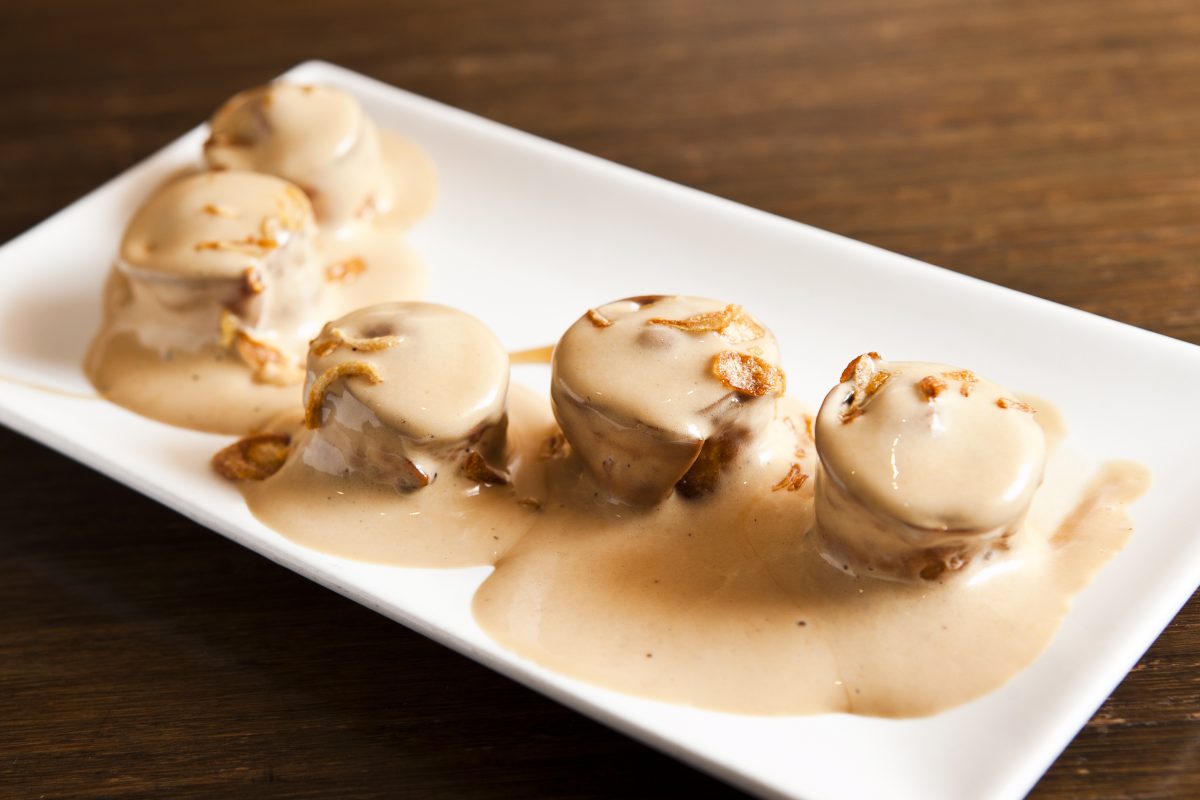 Ruay Thai: Let the Inventive Dishes Surprise You in NYC

Sometimes family brings together culinary traditions in the most interesting ways. Ruay Thai, in Midtown East, is family-run, but unusual in the sense that it melds a fine dining chef who grew up in the hip culinary world of the Northwest, and his wife and sister-in-law, who come from the Esarn region in the northeast of Thailand.

As a result you get dishes like Pad Thai, which is faithful to its street fare pedigree—with a nice spicy kick rather than the cloying sweetness many renditions lean toward by taking out the heat.

You also get some real surprises. Ruay Thai is small and simple in its setting, but some of the dishes that come out of the kitchen can make you think you’re in a fine dining establishment.

Chef Jeff Hardinger is a big, loveable guy who is of Vietnamese descent, but every bit American in his personality. Prior to opening Ruay Thai in 2011, he came from a sous-chef position at The Sea Grill, and still carries influences from his native Northwest.

“It’s refreshing to do it yourself,” Hardinger said of owning his own restaurant. “It’s the difference between renting and owning a house.”

In Eugene, Ore., he worked at a farm-to-table restaurant. That sensibility has always been present in cuisines where traditions dwell closer to the land, and Thai is no exception. In the Esarn region, the rice basket of the country, the cuisine’s personality is anything but shy: “The strength of it—salty is salty, sour is sour, spicy is spicy,” said Hardinger.

What concerns Hardinger about Thai cuisine in the United States is that it’s easy to cut corners—not all ingredients are readily available, and it becomes both convenient and cheaper to use substitutes. He said he is afraid it would go the way of Chinese cuisine. “The food gets dumbed down.”

The family takes pains to source authentic ingredients—galangal, lemongrass, kaffir lime leaves, and sawtooth herb—whether that means coming back from Thailand with pounds and pounds of ingredients in their suitcases, or going to local farms to pick produce themselves. Hardinger tells of a farm within driving distance of the city that grows exotic produce, including Thai eggplants and chilies. They load up the whole family and make a day of it, which also makes for precious family time spent with 5-year-old Anna.

You’ll find some specialties from the Esarn region—larb, for example ($6 or $11), with either ground pork or chicken, herbs, fire roasted chili, lime, and toasted rice powder, which they make themselves.

Hardinger also grinds the meat himself to make into house-made sausages, made of ground pork, garlic, chili, and glass noodles.

His culinary background becomes evident in the little touches. The papaya salad, for example, the Som Tom ($6), that stalwart of Thai restaurant, comes with the option of grilled shrimp or squid ($8).

And then there are the inventive dishes that you would never find in a standard Thai restaurant.

Take the dumplings. At many Thai restaurants, dumplings are store-bought (take a close look and see if they are too uniform). Not only does Hardinger make them in-house but they’re creative and delicious.

Hardinger makes short rib dumplings ($9 for five), by cooking short ribs to the consistency of a terrine, he said, adding an onion caramel cider gastrique, which yield incredibly tender and savory-sweet results (he calls it “French onion soup in a dumpling”). The filling is wrapped with a crispy wonton skin and topped with a sweet soy sauce truffle emulsion. Does $9 seem like a steal? Most definitely. Hardinger said these dishes are really an outlet for him to have fun, and to put to use his culinary training; so much the better for Ruay Thai’s diners.

Another appetizer I tried was the pulled pork steamed buns ($7/$12), a mix of Chinese, Thai, and Deep South influences, Hardinger said. The pork is marinated and slow cooked, and served in a steamed bun with a sweet and tart slaw of green papaya and cucumbers, and apple chili hoisin sauce.

Both these appetizers are perfect for the colder season.

Drinks are a strong suit at Ruay Thai, and another spot where Hardinger’s Northwest origins are felt (with their plethora of craft breweries). He’s made it a point of including both seasonal craft beers on the menu as well as wines that pair well with Thai dishes.

Hardinger put together a four-course tasting menu for Epoch Times readers to sample some of Ruay Thai’s best dishes—it’s $26, or with two drinks, $35. A sample menu is below, though items will rotate—Hardinger said he’ll include “whatever best stuff he has around.”