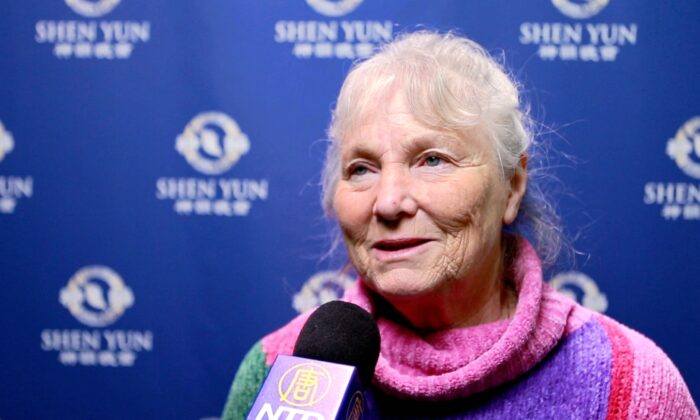 LONDON, U.K.—Brenda Taylor BEM [British Empire Medal], principal of The Brenda Taylor School of Dance and Performing Arts for 55 years—where they teach The Royal Academy of Dance classical ballet syllabus—knows what makes an artist is something that goes beyond just the movement. There is a feeling, a connection that the dancer has to make as well.

On Jan. 21, 2020, Taylor witnessed dancers perfectly grasp the idea at the Eventim Apollo during a performance of Shen Yun Performing Arts.

The feeling that they said, it’s divine. And you know, you’ve really got to reach out to heaven, hypothetically, and feel it. I think this is it.
— Brenda Taylor

“The feeling that they said, it’s divine. And you know, you’ve really got to reach out to heaven, hypothetically, and feel it. I think this is it. We keep saying to our children, our young people, ‘feel when you’re dancing, think good things,'” Taylor said. “I think when you teach for the amount of time I’ve taught—that’s what you have to believe in.”

New York-based Shen Yun is the world’s premier classical Chinese dance company, and its name translates into something like “the beauty of divine beings dancing.” The artists’ mission is to revive the divinely-inspired traditional Chinese culture and share it with the world through music and dance.

“I loved it. I just absolutely loved it. It was the tranquility of it, and I felt I learnt something about the culture of China,” Taylor said.

“What I felt was the stories behind it,” said Taylor, who has extensive experience with Western dance and was excited to get her first glimpse into the authentic traditional Chinese culture.

Taylor marveled at the brilliance of the costumes and the serenity of some of the scenes and characters in the program.

“You come out uplifted,” she said. “It’s made me think—I think that’s it. It was wonderful.”

Taylor wanted to thank the artists and tell them their art was wonderful.

“I would come tomorrow except I’ve got to go to work,” she said. “I’m about to dance!”