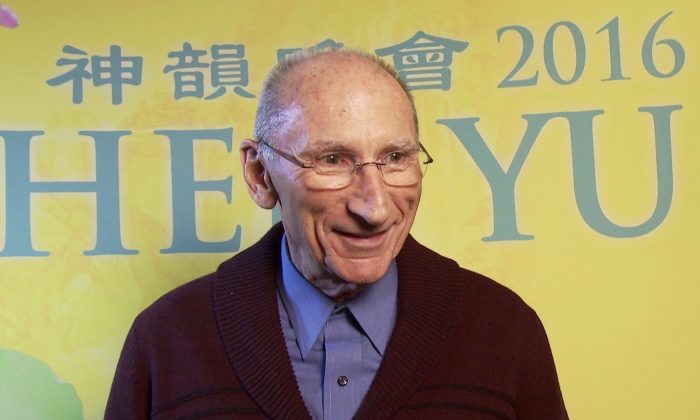 John Schwandke would tell his friends not to worry if they haven't seen Shen Yun. It will be back next year. (Courtesy of NTD Television)

CHICAGO—As a retired radio broadcaster and station owner, John Schwandke has dealt with recorded sound for a good deal of his life. But he had little experience with live musical performances. After hearing Shen Yun Symphony Orchestra perform in October—his first experience in front of an orchestra—he was brought to tears. Subsequently, he decided he wanted to see Shen Yun Performing Arts, too.

The classical Chinese dance and music performance of Shen Yun, which Mr. Schwandke, saw at the Civic Opera House on March 15, appealed to him in several ways.

First, he learned about a different culture, something Mr. Schwandke says he gets excited about.

Shen Yun brings 5,000 years of culture to life on stages around the globe. Using the universal language of dance, the New York-based company tells stories, beginning with the legend of the Celestial Kingdom’s creation, on through to modern times.

Second, he enjoyed the dances and called the performers of classical Chinese dance marvelous.

Classical Chinese dance has almost as long a history as China does. It developed over the centuries, taking in the wisdom and aesthetic principles from each of dynasty to eventually evolve into a comprehensive form known to be exquisitely expressive.

Third, but first in importance to him, was the beauty the costumes.

“They are so colorful and flowing,” said Mr. Schwandke, who is the current Rotary president for Chicago’s financial district.

For each of Shen Yun’s 17 dances, the dancers change into a new set of elaborate handmade costumes, which audiences rave about wherever the company performs.

Shen Yun is also known for its unique orchestra, combining instruments from both the Eastern and Western traditions. The orchestra has become so popular that it has been touring on its own when Shen Yun is off-season.

Beneath the beauty of the orchestra, dance, and costumes, beyond the history of the culture, lies a spiritual bedrock upon which Shen Yun rests. A few of the dances show deities bringing culture to mankind; others that man must stand up for his belief in the divine.

Mr. Schwandke, who considers himself a deeply spiritual person, appreciated these. He enjoyed seeing the importance of a higher power coming down from above.

“Of course it has a happy outcome, and doesn’t everyone love when good comes out ahead of evil,” he said.