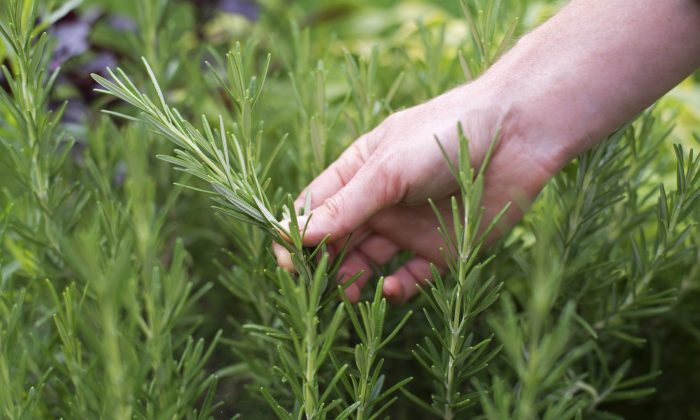 Rosemary is a fragrant herb with many culinary and medicinal applications. (dulezidar/iStock)
Alternative Health

Rosemary is one of the most important plants in ancient Greek herbalism and remains one of the top herbs in the modern spice rack. The name comes from the Romans who called it rosmarinus, which is Latin for “dew of the sea”—possibly a reference to its periwinkle-blue flowers.

Rosemary has many applications, but it’s best known for memory. Shakespeare makes mention of this in “Hamlet,” but the connection came way before him. In ancient Greece, for example, students studying for exams would braid rosemary garlands into their hair to help with recall during tests.

Many ancient herbalists familiar with rosemary recommended it for a weak or failing memory. Seventeenth-century herbalist Nicholas Culpeper was probably the most blunt. He wrote that rosemary was for “cold diseases of the head and brain,” including “dullness of the mind,” as well as “stupidness, the dumb palsy, or loss of speech.”

The association to memory was so strong that the plant became a symbol of remembrance. Throughout Europe and Asia, rosemary was placed on graves to remember the dead, and men embarking on a journey might find sprigs of rosemary in their pockets so that they wouldn’t forget their wives back home.

Rosemary’s memory-enhancing reputation remains strong today. One study from 2013 found that simply sniffing rosemary improved memory as much as 75 percent. Other research has found that rosemary prevents the breakdown of acetylcholine—a neurotransmitter connected with memory and learning.

One aspect of rosemary’s memory-enhancing power comes from its ability to increase circulation, particularly to the head. Rosemary is warming and stimulating. In other words, it makes blood move.

Rosemary’s knack for increasing blood flow not only improves cognitive function and lifts depression, but it relieves pain as well. Rosemary has long been used as a headache remedy, but other parts of the body suffering from pain may benefit too. A rosemary bath, for example, has been used for centuries to treat stiff, painful joints.

Problems of the liver and gallbladder—two organs that are often prone to congestion—have long been treated with rosemary. The herb is believed to soothe inflammation throughout the entire circulatory system, balance blood pressure, and prevent atherosclerosis (hardening of the arteries).

Before refrigeration, rosemary played an important role in preserving meat and fish. Today, rosemary is still used in modern food production to lengthen the shelf life of baked goods, pet food, and other products.

The food-preserving aspect of rosemary is thanks to an antioxidant known as carnosic acid, which has also been found to protect the brain from free radical damage. These free radicals have been linked to stroke and Alzheimer’s disease.

Another antioxidant found in rosemary is rosmarinic acid, which acts as an antibacterial, antifungal, and anti-inflammatory. This makes rosemary a good remedy for treating infections.

Rosemary is related to the mint family of plants. Like other mints, rosemary has a high concentration of essential oils, which is what makes it so fragrant. The essential oils are at their peak when the flowers are in full bloom. Essential oils in rosemary are antimicrobial, analgesic (pain relieving), and are an effective moth repellant.

Culinary. Like other mints, rosemary is a favorite to flavor food. It’s approved by the German Commission on medicinal herbs to treat digestive issues, and it has a unique flavor: pine-like with a touch of sweetness. It pairs well with chicken, fish, tomato sauce, and particularly potatoes, but a little goes a long way.

When using fresh rosemary, you can pluck the needle-like leaves off the woody branch and chop them finely, or if you’re making a soup or stew, toss the whole sprig in the pot and let it simmer. Remove before serving.

As always, fresh is best, but the dry stuff will work in a pinch, provided it cooks for long enough to soften. Otherwise, the sharp, dry needles can be unpleasant to eat.

Incense. One way to release rosemary’s essential oils is through fire and smoke. The ancient Greeks often burned bundles of fragrant rosemary, and the tradition has continued ever since. Rosemary was burned to keep away evil spirits and in religious rituals when frankincense and myrrh were too expensive or hard to come by.

An old French word for rosemary is “incensier.” Up until World War II, French hospitals burned rosemary and juniper to prevent infection.

Bath and Massage. Rosemary is one of the least expensive essential oils on the market, but it should be reserved for external use only. Add a few drops to hot water for an invigorating bath, or add to coconut, almond, or olive oil for massage. Applied to the scalp, rosemary oil helps increase circulation to the hair follicles, offering a potential treatment for hair loss.

Tea. You can brew up a cup of rosemary tea for headache, digestive problems, or just as a gentle morning pick-me-up in place of coffee. Boil water, drop in a sprig, turn off the heat, and cover to preserve the essential oils. Steep for at least 10 minutes. For a green herb, it makes a surprisingly red tea.

Get to Know Savory for Coughs, Sore Throat, Indigestion

Used properly, rosemary is a safe herb, but don’t overdo it. One or two cups of tea a day is plenty. Too much too fast may cause diarrhea or headaches. Some women use it to bring on a period, so it’s wise to avoid in medicinal doses during pregnancy. A little in food is fine, however.

If you can’t stand the taste, or if making tea is not convenient, rosemary is also available in pills and tincture. Contact a qualified health care practitioner for an appropriate dose.

Like other mints, rosemary is very easy to grow, and you’re more apt to use it if there is a fragrant plant nearby. In warm climates, it’s green year round. In cold climates, this Mediterranean native must come indoors for the winter.

It must be watered regularly for a couple weeks when it is first planted, but once it’s established, it is extremely drought-tolerant. In fact, don’t water an established plant too often because rosemary is prone to root rot.