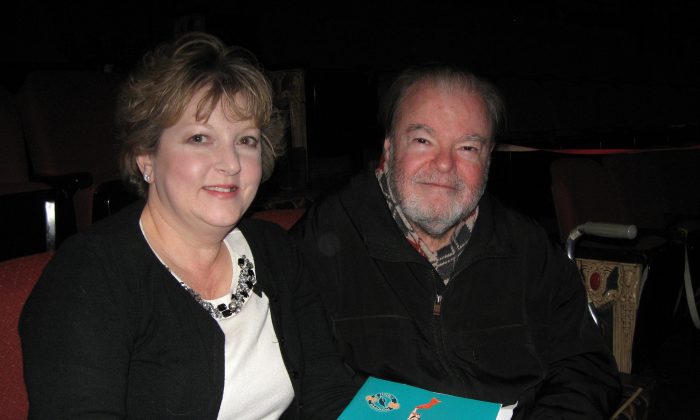 ROCHESTER, N.Y.—Many audience members who come to see Shen Yun Performing Arts are greatly moved by what they witness on stage. This was again the case in Rochester Auditorium on Sunday afternoon, with Shen Yun staging its last show of its two-day run in the city.

The audience members came to see the world’s finest classical Chinese dance company bring the myths and legends of the Middle Kingdom’s bygone eras to life, but many audience members found more than artistry in the performance.

Professional musician Howard Weiss, now retired, was a solo violinist with the Rochester Philharmonic Orchestra. He had been wanting to see Shen Yun for a long time and finally got the opportunity to attend this year with friend Nancy Pool.

“It was spectacular,” added Ms. Pool. “The choreography was amazing—telling the story, the culture, was beautiful. The whole thing was very well done. We’ll be back next year.”

“The [artists] obviously pour in a tremendous amount of energy and it’s so evident that you can just see the joy in the performance—it comes across and you just feel really good after having witnessed and experienced that program.”

Several audience members commented on the inner transformation they felt as they watched the performance—recognizing joy, beauty, and peace emanating from the stage.

“It was fabulous, like nothing I’ve ever seen before. … You just can’t help but leave the show feeling enriched by what you’ve seen,” said Christine Hurlbut, vice president of elder care company ROHM Service Corporation, a third-generation family business.

“It really is a tremendous, tremendous show and I hope everyone gets the chance to see it.”

Development aid worker Joyce Lovett attended the performance last year. This year she brought her friend Maureen Fischer, who was going through difficult times, to help pick up her spirits.

“It was a gift to her to have something bright and wonderful to see,” said Ms. Lovett.

“It was incredible, totally incredible,” said Ms. Fisher. “I can’t explain it … you have to come see the show and then you’ll understand.”

Audience member Ron Morganti said there was a spirituality that shone throughout the performance.

“The whole show is very peaceful and enlightening. You come away feeling good, feeling positive. That’s a good thing, always–especially with the world we live in,” he said.

“It’s phenomenal, it really is. It’s overwhelming. The dancers are so beautiful. I’m overly impressed.”

The reactions are fitting, considering Shen Yun’s roots. Formed in 2006 by overseas Chinese artists, the New York-based company has a mission to revive 5,000 years of divinely-inspired Chinese culture.

This rich culture was forged for thousands of years by the three pillars of Buddhism, Daoism, and Confucianism, and its virtues provide the inspiration for many of Shen Yun’s story-based dances.

But sadly, it is a culture that is not recognizable in China today. Since the Chinese communist party came to power in 1949, spiritual traditions and classical art forms have been systematically destroyed to make way for Marxist ideology imbued with atheism.

He said the performance is “an absolutely marvelous effort” to preserve what was China.

“That show was an evidence of ferociously hard work and precision and talent—there’s a passion that comes from the show and an absolute beauty of motion and color and really an impressive memorable outstanding performance. I’ve never seen anything like it that matches the quality. It’s flowing inspiration—an awesome dynamic.”

‘China is missing so much’

Many audience members were surprised and saddened to learn that Shen Yun cannot perform in China, as the dance company has become a target of the Chinese communist regime. Due to its efforts to revive the suppressed culture, and its frank depictions of some of the oppression in China today, the regime has several times attempted to shut down the performance over the years.

“China is missing so much by not allowing this to be shown over there,” said audience member Duannah Barnum.

“It’s a privilege to be able to see something they cannot present in their own country, so hopefully one day they will be able to do that,” said Edy Sanzo, nurse and president of cultural dance group Latinos de Corazon.

“It doesn’t feel like we’re watching dancers as much as we’re watching people that are doing more than dancing. They’re really kind of talking. They’re expressing feelings and emotions through dance, and it makes the performance that much more significant. I think it’s something that many people should come to see,” he said.

Though the statement was powerful, there was no sense of resentment or hatred in it, said Mr. Rosenfield, rather, a strong sense of compassion and tolerance.

This was exemplified in a dance piece titled The Power of Compassion. The story, set in contemporary China, tells of the meditation practice Falun Dafa, which has been violently persecuted in China since 1999. In the story, a police officer fiercely attacks the meditators but injures himself in the process. A young Falun Dafa practitioner stops to help the the officer who attacked him. Moved by the gesture, the policeman comes to regret his actions.

“Showing that compassion even in the face of oppression unwarranted will turn people around. It was very moving and not just the skill of the dance but the statement that was being made was powerful,” said Mr. Rosenfeld.

“The dances whose themes were compassion—when you look around and see a lot of what’s going on in the world, I think that there’s a lot of healing that can come through compassion. I think that’s a very powerful message and it was nice to be able to see that in the show,” she said.

“We’re not here for materialistic things we’re here for compassion and what we can do and help one another,” said Ms. Lovett.

“We need to help each other and learn from each other’s different backgrounds because we can learn from everybody. It’s just a very wonderful show.”