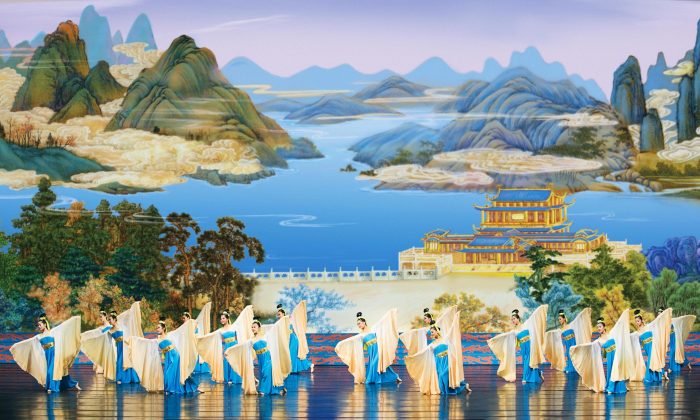 China was once known as “Shen Zhou”—the Divine Land. The ancients believed that their glorious culture was a gift from the heavens, a transcendent treasure to honor and preserve. Yet today, the ancient traditions that constitute that culture have been all but destroyed under the communist rule in China.

The artists interpret real-life historical legends such as the warrior-woman Mulan, stories from Chinese classics such as “The Journey to the West,” and happenings in contemporary China.

Shen Yun was established in 2006 by a group of Chinese artists overseas who came together with a wish to revive the rich heritage of China. Reveling in the artistic freedom of New York, they founded Shen Yun Performing Arts and set out to bring a long-lost culture back to life.

“Shen Yun literally means ‘the beauty of divine beings dancing,'” said Julianne Xu, one of the company’s bilingual emcees. “It’s a very rare kind of arts group. Shen Yun presents to audiences all over the world a true culture—something you don’t see in modern-day China.”

Through the universal language of music and dance, Shen Yun takes audiences on a journey through 5,000 years of Chinese civilization. Animated backdrops transport the viewers to distant lands, dynasties, and eras. A one-of-a-kind orchestra, combining Western and Chinese instruments, accompanies the dances with stirring, original scores.

“It was an extraordinary experience,” said Cate Blanchett, Academy Award-winning actress, after seeing Shen Yun in Sydney in 2011. “The level of skill, but also the power of the archetypes and the narratives were startling.”

“It was exquisitely beautiful,” she added.

At the core of Shen Yun performances is classical Chinese dance, an age-old art form complete with its own system of training and techniques, according to the Shen Yun website.

Passed down among the people, in imperial courts, and through ancient plays over thousands of years, it is rooted in traditional aesthetics that have helped to preserve the culture’s authenticity to this day.

Classical Chinese dance is known for its expressiveness, allowing the dancers to vividly depict a wide range of emotions and virtues—from righteousness and loyalty to benevolence and tolerance, just to name a few.

Movements can be masculine or soft, vigorous or graceful, somber or playful. This range is achieved through a dancer’s bearing and form.

Bearing refers to the expression of inner spirit. In classical Chinese dance, a dancer’s inner world is just as important as the accuracy of his or her technique. Particular attention is paid to synchronizing the breath and gestures, making the movements appear to emanate directly from the dancer’s soul.

The external form includes hundreds of unique movements and postures. An accomplished performer makes them appear effortless, but they require immaculate coordination of the entire body that takes years of rigorous training. A dancer’s every cell—from toes to fingertips, from the angle of the head to the direction of the gaze—must be in perfect harmony.

“It’s absolutely beautiful. It was so inspiring, I think I may have found some new ideas for the next ‘Avatar,'” said Robert Stromberg, director of the movie “Maleficent” and Oscar-winning production designer of “Avatar,” after seeing the show in Los Angeles in 2010.

Beyond its beauty, Shen Yun’s uniqueness lies in its ability to capture the spirit of authentic Chinese culture.

Ancient stories come to life on stage to celebrate compassionate, courageous, and even quirky characters. Audiences rejoice in the triumph of legendary heroes, cheer on the Monkey King on his journey to the West, and witness inspiring scenes of courage from today’s China.

“I think the most unique aspect of a Shen Yun performance is that it has a very strong message of hope, which is something that really touches the audience’s hearts,” said principal dancer Miranda Zhou-Galati.

A broad range of theatergoers—from award-winning actors and musicians to political and business leaders—agree. It’s not rare to see audience members wiping tears during the performance. Incredibly, stories that have stirred people for thousands of years still touch audience members today.