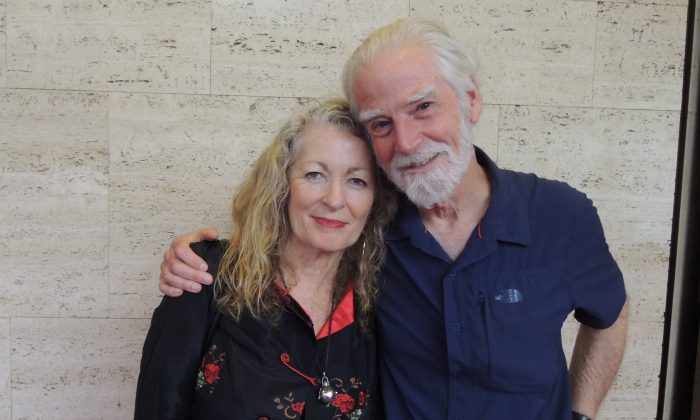 “Oh it’s spectacular,” he said. “And the stories they’re telling. Yes, those are very, very captivating, aren’t they?”

With his teaching background, Mr. Ford said the educational content in the performance was very rich. “Oh yes, yes definitely. What just brought me here was awareness. The education of this long rich culture and we just are … I mean what do we have? 200 years of culture? And not much culture.”

“Showing those time period that was, you get a little sense of what the culture is like. And the richness of it.”

Mrs. Ford agreed. “Because we don’t really know as Westerners, so to watch something like this you realise what an incredibly rich culture it has been through the centuries.”

She mentioned her appreciation of the dancers. “The costumes are amazing, and just the way these people can move is incredible.”

Mrs. Ford was particularly moved by one of the contemporary dance pieces, and commented on its message about the peaceful meditation practice Falun Gong, which she had seen in Brazil, but which is persecuted by the Chinese Communist Party.

“I saw it as that it helps you overcome things. You know like the two young girls, they had all those problems, then the one went up and joined the other one because their belief was so strong.”

Mr. Ford added, “Yes, it’s something to hold onto, that grounds them in a sense. Gives them some sense of hope.”

He said the artists are brave to depict the persecution to the rest of the world, and thought it a shame they cannot perform in China. He applauded Shen Yun’s efforts to revive traditional Chinese culture and values. “Well, I think it’s fantastic,” he said.

Mr. Ford appreciated the humor often included in the stories, mentioning the dance called Ne zha Churns the Sea, where the mythical demi-god is born out of a giant meatball, and given a magic weapon by a Taoist master to save the village from disaster, the program explains.

“And I think that the injection of a bit of humor there too is good. There’s a strong spiritual message, but the lightheartedness keeps you engaged, and not too heavy and burdened down. I really found that refreshing. Little bits there, unexpected bits of humor.”

He also enjoyed the state-of-art digital backdrop, which create spectacular landscapes depicting China’s 5,000-year-old history, with some scenes even transcending this world, according to the Shen Yun website.

“… also I see it as fanciful and lighthearted in some aspects of it. And I love the way they’ve got people jumping and then going up into the film part at the back. It’s just done really, really well.”

Despite being retired, Mr. Ford maintains his association with Disability and Community Inclusion, and his involvement with postgraduate research students.