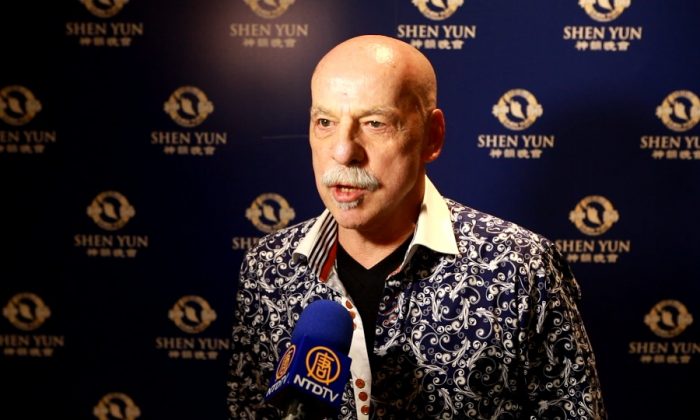 VANCOUVER, Canada—Victor Paquette tutored many Chinese students during his career as a French and art teacher and so he is familiar with the peripheral Chinese culture most readily accessible to the Western world. The now-retired teacher watched Shen Yun Performing Arts at the Queen Elizabeth Theatre on Jan. 23.

As a multicultural hub with a large Asian population, Vancouver has been presented with many facets of Chinese culture, but none quite as cohesive and authentic as the one presented by Shen Yun.

Being based out of New York, Shen Yun is able to freely develop its artistry and pursue its mission of reviving China’s divinely inspired culture without being under the control of the Chinese communist regime.

Mr. Paquette was familiar enough with China to know that the Chinese culture presented on stage by Shen Yun was something that transcended modern-day China’s regime.

“It goes with my philosophy or idea that the Chinese country is not really reflective of its history today because of the communist regime,” he said. “I think that’s a very bad impression of what the Chinese people are really about.”

“This show (Shen Yun) perhaps is what they’re about.”

Shen Yun presents 5,000 years of history on stage, extolling China’s traditional virtuous and illustrious past that survived and thrived for centuries of dynastic rule. Through many well-known campaigns, such as the Cultural Revolution, the Chinese Communist Party systematically destroyed China’s cultural heritage, leaving the Chinese people unhinged from their grand history.

“They yearn for their past which was much more beautiful than the present government today,” said Mr. Paquette. “I think people all over the world have to recognize that China today is not reflective of the wonderful people that are Chinese.”