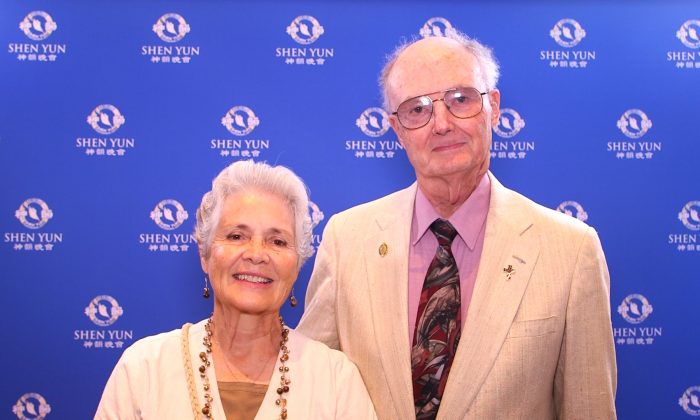 Retired entrepreneur Jerry Hagans and his wife, Carolee, enjoyed the Shen Yun afternoon performance at the McCallum Theatre in Palm Desert, Calif., on April 27, 2018. Mr. Hagans is the founder of Hagans Enterprises, Inc., which primarily operates under the name "Miracle-Ear" in the hearing aids business. "The divine power surrounded us, so it was lovely," Mrs. Hagans said. (Annie Wang/NTD Television)

“It would be so difficult to separate any one [dance piece], but the thing that really impressed me … was the precision of the choreography. If there were 14 performers on the stage, it appeared as if there was one [performer] and 13 mirrors. It was an amazing experience.”

“[The music] was unbelievable.”

“The precision of the photography [digital backdrops] and the individuals on the stage, and how it all came together was remarkable. I highly recommend it.”

“I thought the two [emcees] who announced each [vignette] were really nice so you knew what to expect, and you could follow.”

“I would highly recommend [Shen Yun] to family and friends, and I look forward in the future to other performances.”