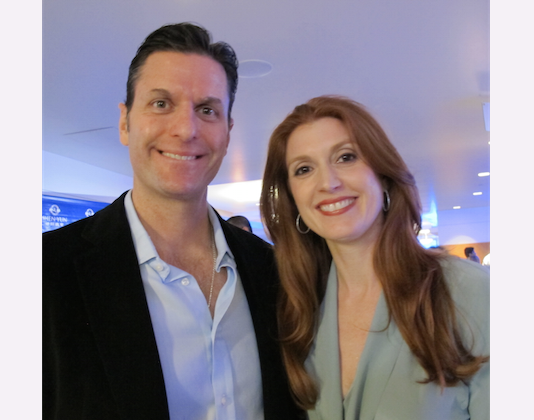 LOS ANGELES—Theatergoers at the Nokia Theatre were delighted by the performance by Shen Yun Performing Arts on March 22.

In attendance was Julia Fowler, a retired dancer who was on Broadway for 10 years. “I really enjoyed it. I think it’s really lovely. It’s very different,” she said about her first experience with Shen Yun.

Also enjoying the show that evening was her husband, Sam Sokolow, a television show producer.

“Everything impressed me,” he said. “I love creative people. I love people that put their heart into their work. I’m a fan.”

One of the key reasons audiences find Shen Yun to be different from other performances they’ve seen is that for many of them, it is their first exposure to traditional Chinese culture, and classical Chinese dance.

The main reason for this is censorship by China’s Communist Party, which became highly noticeable during the Cultural Revolution. “The Cultural Revolution (1966–1976) was catastrophic for China’s traditional culture. During this unprecedented massive political movement, China’s 5,000-year-old culture was almost entirely wiped out,” according to the Shen Yun website.

As a result, authentic Chinese culture has held a much-diminished presence under Communist rule, furthermore resulting in other nations being unable to experience it. Fortunately, Shen Yun has gained world acclaim in carrying out its mission “to use performing arts to revive the essence of Chinese culture,” according to the Shen Yun website.

Another interesting element of every Shen Yun performance is the creative use of props, which range from everyday objects to ornate fans and weapons.

With determined practice, props can act as an extension of the dancer, explains the website, “Stage props strengthen a dancer’s ability to convey intricate emotions. When used to maximum effect, they add to the dances an extra lively spark, forming stunning images of beauty and splendor onstage.”

Every year, many people are touched by the ability of Shen Yun performances to convey the essence of traditional Chinese culture and the 5,000-year-old tradition of spirituality inherent in this ancient civilization.

“I love it, I enjoyed the pageantry, I liked the allegory, I liked how the greater powers play a part in your life,” said Mr. Sokolow. “It’s very apparent to me. I think it’s extremely cool.”