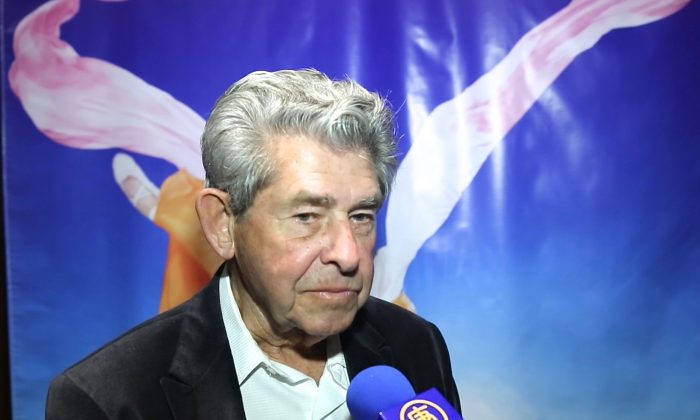 COSTA MESA, Calif.—Mr. Harris Reiche was able to obtain one of the hard-to-get last-minute tickets for Shen Yun Performing Arts New York Company’s evening performance at Segerstrom Center for the Arts, on March 13.

Mr. Reiche is retired and spent 35 years working for the Department of Defense as a top executive computer administrator.

He thought it was worth the trip from San Diego to Costa Mesa to see tonight’s show.

“I would drive hundreds of miles to see it,” he said. He knew each year “the show is different.”

“I saw it about four years ago, and wanted to see it when [it was] in the San Diego area, where I live, and was out of town,” said Mr Reiche.

“So I was delighted to come here today and find out it was playing here. It was a last-minute thing, and I’m so happy to get to see it again,” he said.

Mr. Reiche said that the dancing was the highlight of the show for him.

“I love it when the ladies just glide across the floor,” he said, “like they’re almost floating. I enjoy it.”

Shen Yun’s website provides a wealth of information to help people understand the depth of classical Chinese dance. “Classical Chinese dance is a culture left to us by the ancients who came before us, its beauty should be riches shared by all of humanity, its purity should not be contaminated,” the website explains.

Mr. Reiche was taken by the digital backdrops, which create a rich and diverse new environment to match each segment of the show.

He said the backdrops were “outstanding, so colorful.”

“The backdrops are as grand as they are intricate. So remarkably true to life, they allow you to forget where you are, and journey to another place and time,” says the website.