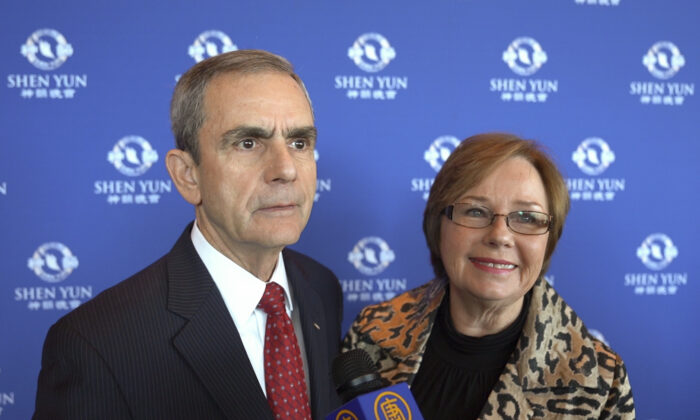 ATLANTA—When American prisoners of war were released by Vietnamese forces in the early 1970s, U.S. Air Force Colonel Lee Ellis had spent 1,955 days in torturous captivity. Once on home soil, he decided to share what he learned from the grueling experience with aspiring leaders through books and speaking engagements.

On Jan. 12, 2020, Ellis attended Shen Yun Performing Arts with his wife and found its themes of faith and overcoming brutal persecution exceptionally powerful.

He felt the heavenly scenes and divine beings depicted in Shen Yun were “very, very powerful because it causes you to think about who you are, what your purpose is. And how do we deal with life on this earth? With the hope for the future.”

New York-based Shen Yun travels the world with the mission of reviving China’s authentic culture. Once called “The Divine Land,” Chinese traditions are filled with spiritual practices, acknowledgment of a Creator, and moral refinement.

“I’ve enjoyed it very much both from a physical activity, the dance, the music and the beauty of it. And then the stories that go with it. There are stories that we can all relate to. Very moving,” Ellis said.

Shen Yun’s storytelling dances depict themes such as the Almighty and the belief in His return to earth. Ellis appreciated this aspect of the performance.

“That rings a bell with me, very much so. I have very strong faith. … I believe that we’re all created by God. And that we have a purpose here on this earth. And that helps me live the kind of life that I want to live. I aspire to, I don’t always live that well. But I’m trying to,” Ellis said, adding that the overall spiritual aspect of Shen Yun was in line with what he sought in his own life, and so has been very important to him.

Ellis, the author of the award-winning books “Engage with Honor” and “Leading with Honor,” has a mission of taking a stand for honorable values and morals that he sees has declined across areas of society.

In his leadership training, he works with the understanding that everyone is different, and teaches how to manage differences. In Shen Yun, he saw an expression of what is fundamentally common to all people.

“None of us are perfect. We need to live together and build a better world and accept each other that are different,” said Ellis, who has traveled all around the world.

To the former Air Force colonel, Shen Yun demonstrates that “all the people in the world have something in common, and it helps us build a brotherhood.”

“[Shen Yun] helps us understand others and their history and how their history has impacted them and how it impacts us. But it really shows to me a lot of unity, the unity in the world,” he said.