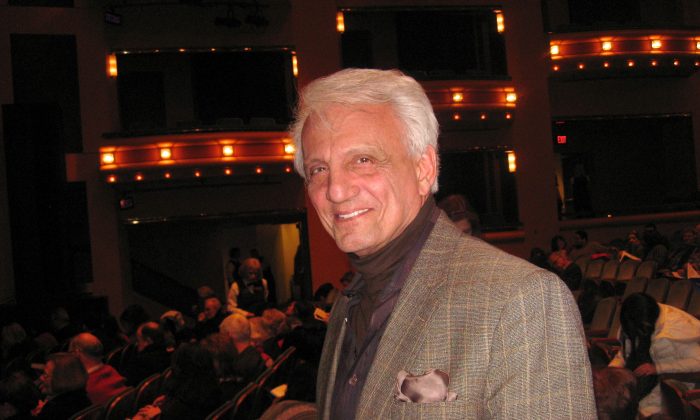 Joe Seta finally got his wish to attend Shen Yun Performing Arts, on Jan. 30, when he saw the performance at the Aronoff Center for the Arts. (Teresa You/Epoch Times)

CINCINNATI—Joe Seta has wanted to attend Shen Yun Performing Arts for years, he said, but it was difficult because the touring company stops so briefly in each city. Mr. Seta finally got his wish on Jan. 30 when he saw the performance at the Aronoff Center for the Arts.

New York-based Shen Yun brings 5,000 years of Chinese civilization to the world through classically trained dancers, award-winning singers, and a full orchestra comprised of both Eastern and Western instruments.

Some of the dances depict Chinese legends and myths, and others tell of ancient or modern times.

Mr. Seta was a graphic designer before retirement, and for 22 years he was president and CEO of Seta, Appleman & Showell, an advertising and graphic design firm. He also served on the advisory board for the College of Mount St. Joseph and was a board member for the Central Academy of Commercial Art.

In speaking on the backdrops behind the performers, Mr. Seta expressed appreciation for the animation that seems to come to life as dancers take over the roles first seen on the screen. “Very nice, I’ve never seen it before,” he said.

But even more interesting to Mr. Seta was that fact that the program tries to represent many peoples of China.

“China is a big place, and I see they’re trying to [present] a lot of the different aspects of the country and the different people that have been together make China,” he said.

He also mentioned being touched by a dance that depicts the brutal repression of a spiritual practice by China’s current regime.

Shen Yun’s website explains: “Over its past 60 years of rule, the communist regime has treated traditional Chinese values, centered on the idea of harmony between heaven and earth, as a threat to its existence. And in its systematic campaigns like the Cultural Revolution, it has uprooted traditional beliefs and destroyed ancient treasures, bringing traditional 5,000 years of civilization to the brink of extinction.”

“I admire these people who are trying to bring it back,” he said, referring to traditional spiritual beliefs.

He hopes “that maybe things will change and everything that [Shen Yun is] trying to accomplish comes true for these folks.”

Reporting by Teresa You and Sharon Kilarski