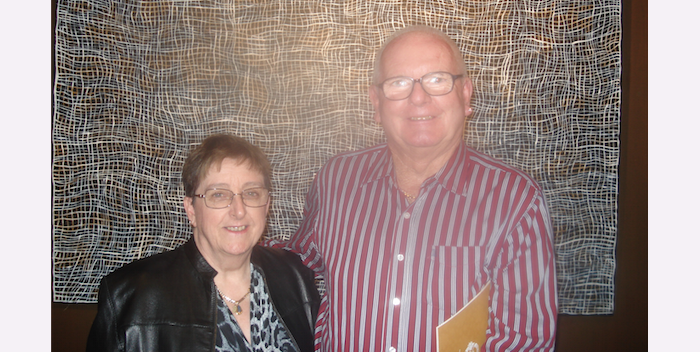 ADELAIDE, Australia—John and Yvonne Kennedy enjoyed the matinee performance of Shen Yun, on Saturday April 19, at the Adelaide Festival Theatre.

Evonne is a retired dance teacher, who danced for the Australian Ballet in Sydney in her younger years. Her impression of Shen Yun: “It’s spectacular!”

“The costumes are just beautiful,” Mrs. Kennedy said. “The choreography is great as well.”

Shen Yun’s hundreds of costumes are sewn by hand for each year’s production. “Every detail is given meticulous attention and is a result of artistic inspiration and careful polishing,” states the company’s website. “The designers stress harmonic balance and contrast. Their objective is an authentic presentation of the attire that comes from China’s divinely inspired traditional culture, and a consummate stage effect.”

John Kennedy is a retired army warrant officer. He said he didn’t know a great deal about China’s culture, but after seeing Shen Yun, he thought that the values portrayed are very much needed in the world today.

“Their culture has been destroyed, and it surprises me that China hasn’t embraced it—the people of China haven’t embraced it,” he said, referring to the fact that Shen Yun is not allowed to perform in China.

As Shen Yun’s website explains: “Shen Yun’s mission is to use performing arts to revive the essence of Chinese culture—traditionally considered a divinely inspired civilization. Since the Chinese Communist Party is officially an atheist regime, it is afraid of the freedom of expression this arts company enjoys in the West.”