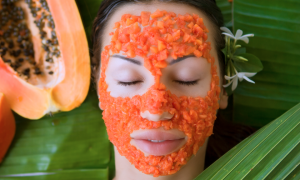 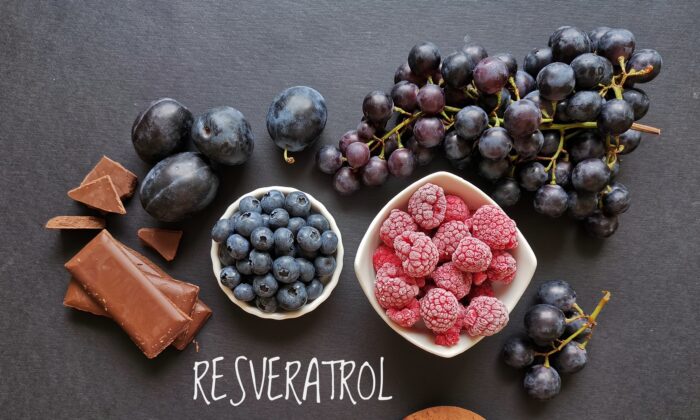 Resveratrol is a compound found in the skin of grapes, blue and purple berries, and dark chocolate that helps plants resist disease and environmental stressors. (Danijela Maksimovic/Shutterstock)
Mind & Body

Resveratrol is a naturally occurring compound designed to increase the lifespan of plants by helping them resist disease and stressors related to changes in the climate, such as too much ultraviolet light.

These polyphenols are found naturally in the skin of grapes, blue and purple berries, and dark chocolate. Research indicates resveratrol has a noteworthy list of therapeutic effects for people. For instance, it may help regulate neurological inflammation and reduce the development of neurodegenerative diseases.

One area of focus for this intriguing phytonutrient is wound healing. An animal study published in July demonstrated one way resveratrol helps skin wound healing. This is significant since chronic wounds are a considerable health challenge and expense.

One study published in 2018 aimed to determine the cost of chronic wound care for individuals who receive Medicare benefits. They used a retrospective analysis of the data to estimate that Medicare spends from $28.1 billion to $96.8 billion on wound care, including infection costs, in just one year.

The most expensive appeared to be surgical wounds, followed closely by diabetic foot ulcers. The researchers concluded that expenditures for wound care were “far greater than previously recognized.” The data revealed there were approximately 8.2 million people who “had at least one type of wound or infection.”

One paper published in 2019 evaluated the results of 28 studies and found analyses aligned with past research, identifying the vast majority of wounds were chronic leg ulcers, a common complication of Type 2 diabetes. Some of the identified factors that affect wound healing include hydration, blood circulation, obesity, smoking, nutrition, and diabetes. Resveratrol addresses several of the factors that undermine wound healing and may reduce the number of chronic wounds and support wound closure. Data from the most recent study is encouraging.

Researchers have been investigating the skin-healing properties of resveratrol for years. The focus of the study has moved from demonstrating that resveratrol has a positive impact on wound healing to trying to identify the specific mechanisms at play.

Resveratrol was shown to increase granulation and wound healing in animal studies, and support skin healing, scarring, and photoaging [sun aging] in a review of 41 studies.

In 2020, a lab study demonstrated that resveratrol increased mesenchymal stem cell secretion of growth factors that improved impaired wound healing in a dose-dependent manner. In the same year, authors of another paper proposed that after reviewing the benefits of resveratrol on the skin, they believed that “topical resveratrol could be a valuable alternative not only for daily skin care, but also for the prevention and treatment of various cutaneous [skin] disorders.”

Topical administration of resveratrol in mice with Type 2 diabetes improved chemical responses that correlated with higher blood vessel density, which suggested that resveratrol could promote endothelial [the cells that line the cavities of the heart and blood vessels] cell proliferation in those with diabetes.

The 2021 study published in Laboratory Investigation, sought to analyze one pathway that resveratrol uses to regulate skin repair. They used both a lab model and an animal wound-healing model, through which they evaluated cell viability and apoptosis [programmed cell death]. The researchers found resveratrol promoted cell proliferation and improved wound healing by increasing a single strand, noncoding RNA molecule called miR-212.

Evidence suggests resveratrol can cross the blood-brain barrier and may help regulate brain inflammation, which is a significant factor in the development of many neurodegenerative diseases. According to a report from Georgetown University Medical Center, giving resveratrol to individuals with Alzheimer’s helps restore the blood-brain barrier integrity and reduces the ability of harmful immune molecules to infiltrate the brain tissue.

By slowing the inflammation of the brain cells, it slowed the cognitive decline of individuals, as compared to a matched group of placebo-treated patients with Alzheimer’s. Another animal study involving resveratrol had interesting effects, including increased aerobic activity and running time, protection against diet-induced obesity and insulin resistance, regulated metabolic function, and stable health.

Those findings are interesting since improving aerobic activity and reducing insulin resistance and obesity can also protect the brain. Resveratrol was found to suppress inflammatory effects in certain brain cells by inhibiting different proinflammatory cytokines and key signaling molecules. Later, another group of scientists confirmed the anti-inflammatory properties of resveratrol have neuroprotective effects.

There’s also solid data that resveratrol helps to clear out the plaque in your brain that leads to Alzheimer’s disease. One study published in the Journal of Biological Chemistry found resveratrol to exert “potent anti-amyloidogenic activity.”

A Chinese animal study also found that resveratrol can lower the risk for vascular dementia, the second-most common form of dementia after Alzheimer’s. Unlike Alzheimer’s, vascular dementia results from impaired blood flow. One study in 2010 found that a single dose may improve blood flow to the brain. Another study in 2017 noted that “pre-clinical models unambiguously demonstrated numerous vasculoprotective effects of resveratrol. In clinical trials, resveratrol moderately diminished systolic blood pressure in hypertensive patients, as well as blood glucose in patients with diabetes mellitus.”

One study showed resveratrol also activates autophagy, the process the body uses to break down and recycle dead cells. Another study showed it inhibits neuronal apoptosis, which could contribute to improved cognitive function. A human study in 2020 showed that “regular consumption of resveratrol can enhance cognitive and cerebrovascular functions in postmenopausal women, with the potential to slow cognitive decline due to aging and menopause.”

Evidence suggests resveratrol has many other health benefits. Studies have demonstrated it has anti-inflammatory, cardioprotective, antioxidant, antiaging, and chemoprotective properties. Additional blood flow to the brain has demonstrated it can improve learning, mood, and memory.

“Resveratrol can suppress the toll-like receptor (TLR) and pro-inflammatory genes’ expression. The antioxidant activity of resveratrol and the ability to inhibit enzymes involved in the production of eicosanoids contribute to its anti-inflammation properties.”

The immune-boosting potential of resveratrol has spawned an outgrowth of research into the possible effect it may have on cancers. Researchers wrote some of the mechanisms resveratrol uses that may alter the immune system include reducing the effects of mitochondrial damage, diminishing abnormal T-cell activation, and boosting natural killer cells.

Resveratrol also has an effect on your bone density and quality of bone. In postmenopausal women, osteoporosis is a widespread and serious condition. As bones become more fragile and porous, they are at greater risk of fracture. Of all people over age 50, approximately 50 percent of women and 25 percent of men may suffer a fracture in the years to come.

One author in the study said the modest increase at the femoral neck resulted in improvements and “a reduction in the 10-year probability of major fracture risk.” Doctors prescribe replacement hormones and bisphosphonates to treat osteoporosis but, as mentioned in a study in Nutrients, their side effects can be so dangerous that they may outweigh the benefits.

The compound has also been found to improve blood sugar in those with Type 2 diabetes. After just eight weeks of supplementation, fasting blood sugar declined, high-density lipoproteins increased, and insulin levels improved.

Seek a Healthy Source of Resveratrol

While grapes are a source of resveratrol, you’ll not get the neuroprotective and antiaging benefits by drinking red wine.

Gregorio Valdez, an assistant professor at Virginia Tech Carilion Research Institute, said there is so little resveratrol in wine that you can’t drink enough of it to get the benefits. Additionally, alcohol has several significant negative effects on your health, including its effects on sleep, brain aging, and DNA.

One way to access the benefits of resveratrol is by eating muscadine grapes, which contain the highest concentration among foods, especially in the skin. Mulberries and blueberries are other good sources.

Be mindful of your intake, however, because fruit also contains fructose. A whole food resveratrol supplement containing bits of muscadine grape skin is another option.