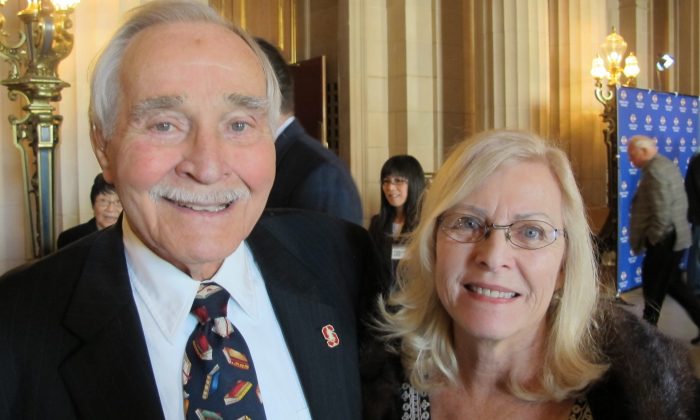 SAN FRANCISCO—Respected author and historian Norman Tutorow felt fortunate to be among the sold out crowd for Shen Yun’s last performance in San Francisco on Jan. 11.

“It’s incomparable, it really is,” explained the well dressed author standing in the grand antechamber of the venerated San Francisco War Memorial Opera House. “I’ve never seen this before or anything like it.”

Best known for his prolific works on American history and philosophy including The Governor: The Life and Legacy of Leland Stanford, Mr. Tutorow and his wife Evie were both inspired to learn more about Chinese culture and saddened to hear Shen Yun could not be performed in China. “I really can’t believe that they can’t show this in China, that the Chinese just miss out,” he said.

“I just feel so fortunate to be seeing it. It really is spectacular,” said the former Visiting Fellow at the Hoover Institution on War, Revolution and Peace at Stanford University.

The company’s mission is to use performing arts to revive the essence of Chinese culture—traditionally considered to be a divinely inspired civilization. Since the CCP is officially an atheist regime, it is afraid of the freedom of expression this arts company enjoys in the West, explains the Shen Yun website.

Mr. Tutorow found much to love about Shen Yun’s artistic elements. “I’m particularly fascinated by the artwork,” he said, referring to Shen Yun’s animated digital backdrop. “It is so realistic. It really intrigues me.”

“With state-of-the-art graphics technology, Shen Yun’s digital-backdrop team creates vividly animated settings, extending the stage and transporting the audience to a world where heaven and earth are one,” states the website.

When describing his impressions of Shen Yun’s classical Chinese dance numbers he said, “The dancing is spectacular. I don’t know how anyone can write this sort of thing and do such a good job.”

Mrs. Tutorow summed up the show by saying, “It’s fantastic!”