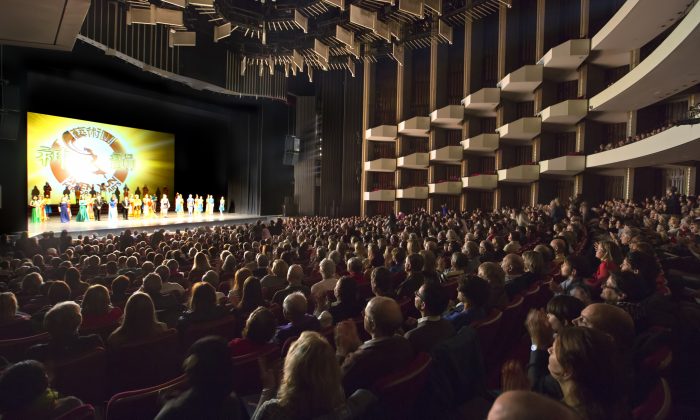 The full house audience of Shen Yun's Saturday matinee applauds the performance at the National Arts Centre after the show. (Evan Ning/Epoch Times)

OTTAWA, Canada—The jumps, flips and tumbling techniques performed by the dancers of Shen Yun Performing Arts thrilled Robert McEwan as he took in the matinee show at the National Arts Centre on Jan. 4.

A director of corporate business systems for Canada’s National Research Council, Mr. McEwan said he thoroughly enjoyed the athleticism of classical Chinese dance, “and the very colourful costumes that they wear, and how the music interrelates with the video. It makes a very exciting viewing.”

That “video” is Shen Yun’s vividly animated digital backdrop that provides a window to both heavenly and earthly realms, as well as scenes from Chinese history.

That history, and the stories contained within it, provide a rich source of inspiration for the large-scale dance performances Shen Yun stages.

“The choreography was very good. It tells a story through dance. I personally enjoyed it very much,” Mr. McEwen said.

New York-based Shen Yun’s mission is to revive 5,000 years of divinely inspired Chinese civilization, a rich heritage that has been decimated under 60 years of communist rule. Mr. McEwen said he appreciated the effort.

“I don’t know much about the history, but I do find it very moving,” he said.

“I think it’s good because I don’t know a lot about the history, so having a little bit of perspective of each of the dynasties and times is very good.”

He said there were lessons from that history offered in the show that are beneficial for people today.

“I think the same values that were important thousands of years ago are still important today in our daily lives. Things like honesty, good virtue, and family life, I think some of those time-tested virtues never change. Even in today’s modern world, they’re still the same.”

Tarek Jerjawi, a project manager for an international education firm, also took in the Jan. 4 matinee performance and spoke about how his kids really enjoyed Shen Yun. He wanted to know if the music performed by Shen Yun’s orchestra that features traditional classical instruments and Chinese ones was available for purchase onsite.

“It was amazing. We were waiting for two months for this event and my son just has to buy souvenirs [after seeing it],” Mr. Jerjawi said. “I’m looking forward to attend next year’s show.

He recommended the performance and said he felt privileged to be able to attend such a high-caliber event.

“If you miss it, you miss something really precious in your life,” he said.