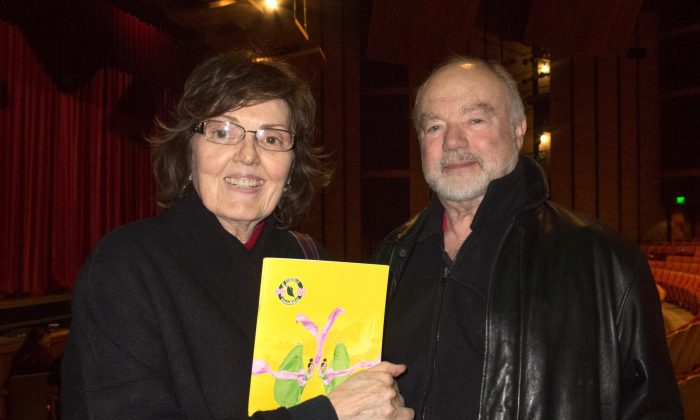 “It was everything I expected and more,” Ms. Hamilton said after the performance at the Morrison Center for the Performing Arts on Jan. 20.

“There were no weak links anywhere,” she added. “Incredibly high quality in every regard.”

Ms. Hamilton came to the theater with her husband Brett Hamilton, also an opera singer who now teaches Business Management at the University of Maryland. Ms. Hamilton was with the Metropolitan Opera New York for 5 years.

Before that, she spent over 20 years performing in Germany and throughout Europe.

As a seasoned performer, Mr. Hamilton said he could appreciate the work and discipline that went into staging the performance.

“I loved the two stringed instrument—she was really excellent,” he said about the erhu virtuoso.

Ms. Hamilton said that even if she were given the chance, there is nothing about the performance that she would change—even the smallest details made an impression on her.

“I had to think of what it must have been like to transport all those costumes and have them look as if they were brand new, no wrinkles, nothing,” Ms. Hamilton said.

“I love the fact that they took a stand,” Ms. Hamilton said.

Shen Yun’s mission is to revive 5,000 years of traditional Chinese culture, which has been systematically eliminated from China ever since the Cultural Revolution in the ’60s.

“I think it’s good payback for the political theater that occurred under Mao. The theater [under Mao] was used as a vehicle for propaganda,” said Mr. Hamilton. “It’s nice to see the other side coming back.”

To this day, Shen Yun is barred from Mainland China, where almost nothing remains of the country’s ancient past.

“Goodness, virtue, honesty, kindness, compassion—these are all virtues that my husband and I support, that we admire, and we long for,” Ms. Hamilton said.

Ms. Hamilton was sure that Shen Yun carried a “message that could bring peace to the world.”