Douglas Heywood says, ' It was stunning' and Alexandra Cameron says, 'It's very calming' 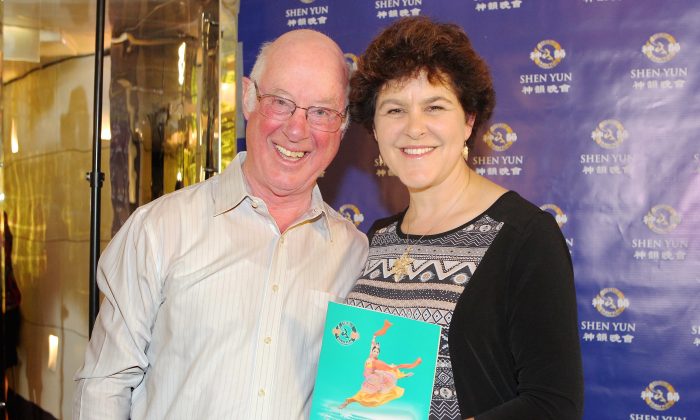 Mr. Heywood was accompanied by his wife, Alexandra Cameron, who agreed with his sentiments at the internationally-acclaimed Shen Yun Performing Arts New York Company’s matinee session.

“I thought it was stunning and just so wonderful to come to,” Mr. Heywood said at interval. “The energy, the colour, the movement, the sound of the orchestra, it’s such a relief from all the turmoil outside in the world.”

Shen Yun has classical Chinese dance at its heart but also incorporate folk and ethnic dance and story-based dance as well as solo singing and instrumental performances.

According to the Shen Yun website, “the primary trait that distinguishes the singers of Shen Yun is their use of bel canto technique to sing Chinese text, these singers’ ability to do this is unparalleled.”

“She sang it with great intensity and she really meant what she was singing which I thought was terrific,” he said.

Mr. Heywood was one of Melbourne’s most sought-after Baritone soloists in the sixties and is a renowned choral and orchestral conductor. He also has founded a number of orchestras and choirs during his career. He received the prestigious Medal of the Order of Australia, OAM, in 1995 for his services to community music and music education.

Mr. Heywood loved the orchestra and the conducting.

Conductor, Cristian Cimei, trained both in Italy and Sydney,  completed his graduate study in conducting at the Sydney Conservatorium of Music, where he received his master’s degree with high distinction. He was appointed a music director of the Rockdale Opera Company and won critical acclaim for his conducting of La Traviata.

Trombonist, Alistair Crawford, was born in Sydney and has performed with the Melbourne Symphony Orchestra, the Royal Melbourne Philharmonic, and the Melbourne Opera Orchestra. When studying at the University of Melbourne, he received the Lady Turner Award as the most promising musician, and pursued later studies at the Australian National Academy of Music.

Mr. Heywood liked the compositions and arrangement of the music and the interplay with the Chinese and Western instruments.

“That works perfectly, it really does, and they are very good … there is some lovely writing for the orchestra. Really lovely,” he said.

“I like the way they get the different colours of the orchestra from the Chinese to the Western and blend those together, I think it’s terrific. It’s really, really lovely writing by the composers and arrangers.”

Based in New York, Shen Yun brings to life China’s 5,000 year culture through a series of mini-dramas in classical Chinese dance and music.

He also appreciated the animated digital backdrop screen behind the dancers perfectly choreographed to match the performance on stage, the colours of the costumes, and the orchestra.

“The graphics at the back, behind the dancers, are stunning and just the energy of the whole show and the colours. It’s really magnificent,” he said.

Ms. Cameron enjoyed the Shen Yun performance as well and particularly liked the uniformity and the precision of the dancing. She said, “The movement is just beautiful and so together.”

She also enjoyed the orchestra.

“I really appreciate the difference in the tonality, the harmonies that you can hear with the Chinese music, with some of the Western instruments as well,” Ms. Cameron said.

“But also the colour and some of the cheeky little aspects, there’s a real sense of humour that comes out.

“Some of the percussion instruments and, of course the gong, it’s just so symbolic of China.

“I really enjoyed seeing the musicians on stage as well. The drums … they’re so well-rehearsed. It’s just beautiful to see.”

Ms. Cameron felt the Shen Yun performers had a purity and a belief in what they were doing. She appreciated English subtitles appearing on the backdrop screen.

“I think overall,  it comes across as really genuine, and I really enjoyed seeing that. It’s very calming.”

She said she had tried to explain Shen Yun to many people as she felt it was a very unique and varied performance.

“I’ve explained it to lots of people, but the costumes, the beauty, elegant and dainty, and very energetic. There’s just that whole variety,” she said.

“You can go away just feeling uplifted and just very pleased that there is some beauty in the world, apart from all the horrible things that are going on at the moment.”