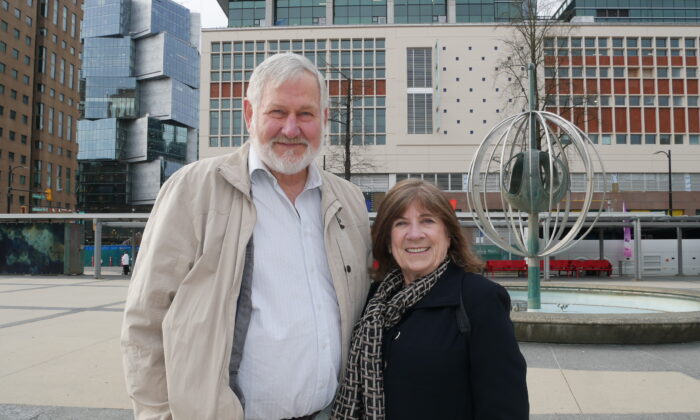 VANCOUVER, Canada—Dance is one way for the body to express a language that can’t be spoken. Through the fluid movements of Shen Yun Performing Arts, the dancers convey moving stories without uttering a single word.

“Their body expresses their feelings so clearly. We were sitting that close up so I could see that they were always using their face with their body with their arms. So everything makes a picture,” said Teresa Mackereth, artistic director of the Dance Academy of Prince Rupert and a recipient of the Queen’s Jubilee Medal for her contributions to dance.

Ms. Mackereth, who has taught dance for over 45 years, came with her husband, businessman Doug Mackereth, to Vancouver to see New York-based Shen Yun perform at the Queen Elizabeth Theatre.

“The communication was excellent,” she noted. “I felt that they all worked together to tell the story and all their movements were so accurate and so brilliant. We really enjoyed the whole thing.”

The combination of beautiful music and athletic dancers creates an environment of great energy.

Shen Yun‘s dancers are trained in classical Chinese dance, an ancient discipline of dance that has influenced many other art forms, including gymnastics, acrobatics, cheerleading, and even modern ballet. Every year Shen Yun takes an all-new production to over 100 cities around the world on its global tour.

I think it’s brilliant. I was just mesmerized by the unison and the storytelling and the accuracy of all the choreography.
— Teresa Mackereth

“I think it’s brilliant. I was just … mesmerized by the unison and the storytelling and the accuracy of all the choreography. It was very moving,” Ms. Mackereth said.

Shen Yun’s mission is to revive China’s 5,000 years of civilization and traditional culture. Using the elaborate history of the Middle Kingdom, the company takes beautiful stories and turns them into dances.

“History is so important, and you need to keep history because otherwise you lose it and you don’t learn from it,” said Ms. Mackereth.

The couple said they traveled over 17 hours from Prince Rupert to Vancouver and weren’t disappointed in having made that long journey.

“It’s all very well done. And it’s something that we don’t see that often. We live in a very small town of 11,000 people. We came down here for a week and I wanted to see it again and I wasn’t disappointed. I thought it was wonderful,” Ms. Mackereth said.

Shen Yun‘s backdrop uses animation as part of a patented method to limitlessly extend the stage and give the audience the feeling of being transported with the artists as they fly high into the sky or dive deep into the sea.

“The way you have the scene on the back where the people jump over and disappear, that’s cool. Very neat. I don’t know how they do it,” said Mr. Mackereth.