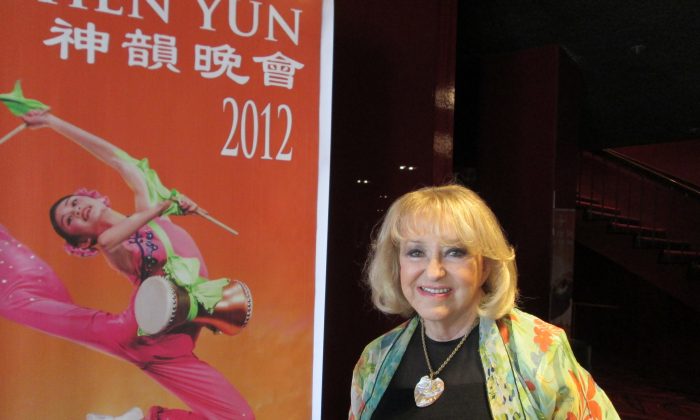 SAN DIEGO—Sue McNary has been creating art professionally since 1965. For 18 years, she owned and operated a gallery at the world famous Hotel Del Coronado. She is a former board member of the San Diego Art Institute and served on the San Diego County Arts Council.

Mrs. McNary’s paintings and etchings are literally floating around the world on ships, and they can be found as well in corporate headquarters, hotels, restaurants, and even the National Archives in Washington, D.C.

She sounded blissful as she spoke about Shen Yun.

It has fulfilled my dreams.
— Sue McNary

“I have been wanting to come for so long, and it has fulfilled my dreams,” she said. “It was so beautiful, and being an artist, the color combinations are gorgeous. How they thought of putting those colors together was amazing. I love the performance. Everyone should see this.”

Mrs. McNary wished she had a pad of paper to write down the color combinations of the costumes.

“They put orange with pink, yellow with pink; the different colors were so unusual. The designer was excellent,” she said, adding the Shen Yun’s costume designer was brilliant as well.

Shen Yun is a New York-based, classical Chinese dance and music company that tours to some 100 cities in 20 countries and five continents for six months of the year. It’s mission is to revive the richness and exquisite beauty of traditional Chinese culture.

Hundreds of new costume pieces are created each year for Shen Yun. The company website explains, “Every detail is given meticulous attention and is a result of artistic inspiration and careful polishing. The designers stress harmonic balance and contrast. Their objective is an authentic presentation of the attire that comes from China’s divinely inspired traditional culture, and a consummate stage effect.”

Mrs. McNary said the costumes and colors were her favorite, and they made her happy.

She also enjoyed the Shen Yun Orchestra as well as the vocal and instrumental soloists.

“The orchestra was beautiful. The individual soloist and piano player [were] wonderful—very professional, very beautiful,” she said, adding that the singing added to the dancing.

The performance includes approximately 20 vignettes that depict poignant parts of Chinese history and lore such as the legend of the Yellow Emperor descending from the heavens to reign, or a piece called The Mystical Udumbara, based on a flower that blossoms every 3,000 years.

Mrs. McNary noticed that the dancers and orchestra performed in unison.

“It’s perfect,” she said. “I love the way there is dance and there is music. I think that’s perfect.”

After the performance, Ms. McNary said that Chinese culture is much more interesting than hers.

She plans on encouraging others to see Shen Yun and telling them, “You’ll never believe the colors and the dance; it was beautiful.”

She added, “Everyone has to see it at least once if not more; they really should come.”