‘Remember That We Are Divine,’ Says Journalist at Shen Yun 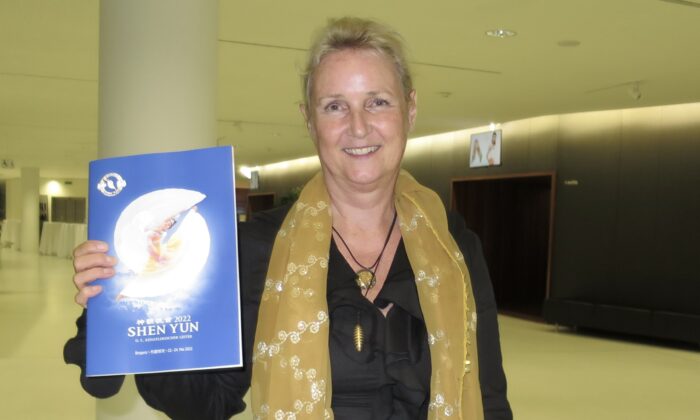 BREGENZ, Austria—There are legends in many cultures that are about humanity’s connection to the divine. Susanne Schulze, a journalist, found that after seeing Shen Yun Performing Arts, she was reminded of our connection to the heavens.

“There is this connection that the divine is not outside of us, but the connection is [within] … remember that we are divine,” Ms. Schulze said.

Shen Yun is based in New York and its artists are trained in classical Chinese dance. The name “Shen Yun” means the “beauty of divine beings dancing.”

She added that the performance shows “the progression of the light through the dark times into the real God-human-cosmos-earth connection and that it is possible to liberate oneself in every system.”

‘The music was a great match for the performance’

Although Shen Yun is dedicated to reviving traditional Chinese culture, the performance is not allowed in China by the ruling communist party.

Marcel Haltiner, the owner of an automation company, attended the performance on the evening of May 24 with his daughter. He concluded that “China would be on a better path if they could revive this traditional culture more.”

He shared his thoughts on how traditional culture is likely better for society than what we are experiencing now.

“The old values should have continuance and modern society is not necessarily the right way. We’re probably a little bit on the wrong path and the old values certainly bring more quality to life and make the world better,” he said.

Every performance, the artists, the musicians, and the production team of Shen Yun pull off an impressive display of teamwork.

“Well, the music was a great match for the performance. And also the stage design, that was unique. At the back there, the transition when it went from animation to live, that’s superbly done,  really. My compliments!”

The animation that Mr. Haltiner referred to was Shen Yun’s patented digital projection that allows for quick setting changes without the use of bulky scenes that are typically seen in traditional opera. The backdrop is an endless extension of the stage.