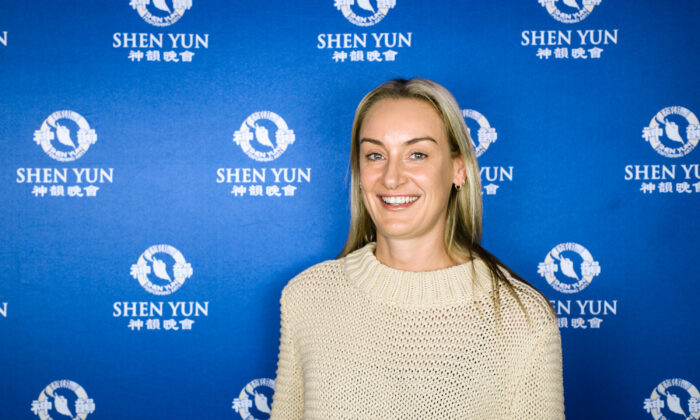 Shen Yun is currently touring Australia to present “China before communism,” and Ms. Sinclair said she was blown away by the scope and quality of dancing.

A world-renowned classical Chinese dance company based in New York, Shen Yun’s mission is to revive China’s traditional culture and remind people of the culture’s rich spiritual heritage that once celebrated philosophies like Confucianism, Buddhism, and Daoism.

It does this by bringing to life stories from China’s 5,000-year history through song and dance.

“The emotion that comes from the stage is just unlike anything you really see at all,” she said. “Being able to see these really deep messages through the dance is just amazing.”

“The technical ability is first class, the choreography is just stunning, the synchronicity of dancers, the costuming, I just can’t rate it any higher,” she said.

A Return to Spirituality

Jason Blake, a general manager at Leo’s Fine Food & Wine who was also in the Melbourne audience with his family, said that Shen Yun’s presentation of “China before communism” was where he believes society has to go.

“I think it’s our future,” he said, “because if we don’t move in that direction, we’re not going to be progressing in our lives.

Mr. Blake’s wife, Amanda, agreed, saying, “I think we have to—and particularly in the West—we have to return to spirituality. We must, otherwise, we’re lost.”

Ms. Blake said that their son was currently studying the Three Pillars of Chinese philosophy—Confucian thinking, Buddhism, and Daoism—in homeschool.

“We’re looking at the immortal realm, so the Celestial Kingdom, and we’re studying the Daoist Immortals. So the show was very important for Rafael’s homeschool to understand the fundamentals of Chinese thought prior to communism,” she said. “It’s fantastic.”