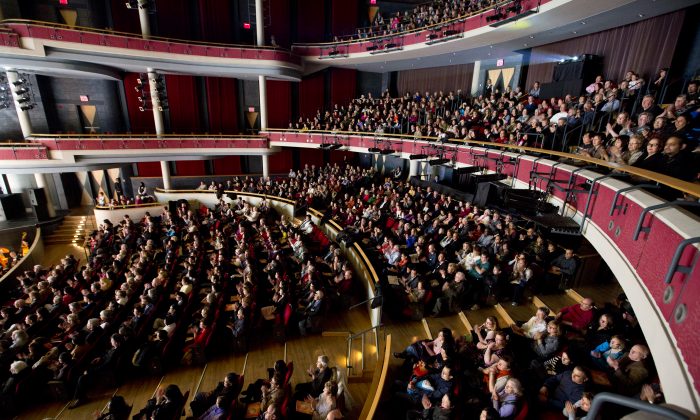 The cast of Shen Yun Performing Arts takes a curtain call following its performance at The Living Arts Centre in Mississauga on the afternoon of Jan. 18, 2014. (Evan Ning/Epoch Times)

MISSISSAUGA, Canada—Ruth Renwick knows what it means to give someone an incredible experience, and on Saturday night, she said she had one of her own.

That’s when she saw Shen Yun Performing Arts at the Living Arts Centre.

“It’s beautiful. Wonderful music, wonderful choreography, wonderful colours. And what I like a lot is the combination of the background with the special effects that incorporates what’s taking place on the stage. That was excellent.”

That background is Shen Yun’s vividly animated backdrop, and the special effects are the scenes that play out there, which sometimes interact with the dancers on the stage in surprising ways.

Renwick tries to help others have their own surprising interactions. She created a non-profit charity in 2003 that has helped over 2,000 students have a night to remember.

Her organization, Inside the Dream, gives high school kids without the means a Cinderella story, with Renwick cast as the Fairy Godmother. With high-end clothing donations, a team of tailors, stylists, and others, she helps young men and women look their best for their graduations and proms.

Renwick received the 2007 More Than Words award from Harlequin, one of the world’s leading publishers of books for women, for her extraordinary contributions to her community.

She said Shen Yun had made its own contributions to the community that night by sharing the tremendous history of China.

She also lauded Shen Yun’s effort to revive China’s 5,000-year-long divinely inspired culture, as much for knowledge as for its entertainment value.

“It’s art, I’m so glad they can bring something like this to Mississauga. We need more quality like that, because when you turn on the television—garbage. But this is quality.”

Ms. Renwick said she was impressed by Shen Yun’s dancers, noting that they were flexible, artistic, and of noteworthy skill.

“They’re excellent—too many hours of practice.”

Likewise with the musicians and singers, she said.

“You have to come and see it,” she said.