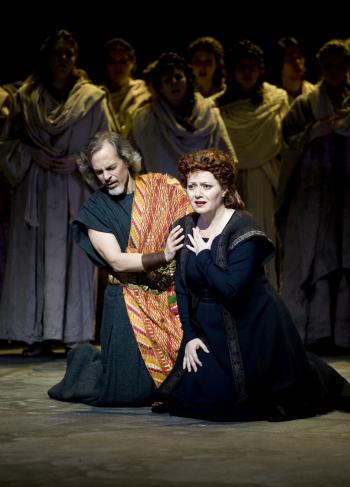 BY Andrea Hayley TIMEDecember 2, 2009 PRINT
Norma, Vancouver Opera’s 50th anniversary season opener, is rich with quality and, for some theatre goers, nostalgic meaning.  With no less than 135 productions under his belt, Maestro Richard Bonynge is a foremost expert on Norma. His very first show, in 1963, was also in Vancouver.

Seasoned Vancouver opera-goers, expecting this year’s production to be even better than the last, were not disappointed by a familiar maestro with deep knowledge and love for the Bellini opera

“It is a piece that I care about a lot,” said Bonynge in a post-rehearsal interview with Vancouver Opera posted on youtube.

What makes Norma unique is that it is one of only a few operas composed in the bel canto style. It is also known as the finest singers’ opera ever written.

In fact, the singing in this opera is simply mind-blowing; it is constant, it is varied, and it is deeply stirring.

The style is most often associated with the operatic repertoire of Rossini (1792-1868), Bellini (1801-1835) and Donizetti (1797-1848), all composers during the age of Romanticism. Bellini’s operas are particularly well known, as the man’s attention to detail and the respect he won as a result earned him great fame.

“The role of Norma itself is extremely challenging,” said Bonynge. “It is written for three different voices. And if you can get someone who can sing it you are very lucky, and I think we are very lucky this time.”

Hasmik Papian, an Armenian-born soprano, made her debut with Vancouver Opera in the iconic role of Norma. From the beginning she stunned the audience with her voice mastery and range, as well as her noble stage presence.

“I think the singer who can sing this role is blessed, because it is a wonderful part. Dramatically, musically, and vocally, there is everything there. It is wonderful; it is magical,” said Papian, a veteran of the Metropolitan Opera, where she played the same role.

The operatic libretto revolves around Norma, a high Druid priestess who wields the power of life or death over many of the people around her—her secret lover, her young children, her best friend, her clan, and the Roman army. Yet in the end she sacrifices her own life to protect them and pave the way for their future.

The scenes and the themes of Norma are moving because they are conveyed realistically, and once touched by that first moment, the strength of the production sustains the emotional high throughout.

Particularly sweet were Norma’s opening cavatina, "Casta diva," a prayer to the moon goddess—which features an exceptionally wide range of notes and effectively sets the stage for what the audience can expect—and the frequent duets between Papian and mezzo soprano Kate Aldrich.

The two together are captivating, their voices like glass swords, or melting icicles depending on the moment, especially during extended dual cadenzas.

Also displaying powerful voices were the two leading men, Alain Coulombe (bass, last appeared with VO as Zuniga in Carmen) and Richard Margison (tenor, just finished a Metropolitan Opera run of Aida). After copious quantities of sweet female voices, one needed the reassuring and grounding “lows” they offered up.

Somewhere in the middle were the 40-plus members mixed chorus that contributed some enchanting notes and melodic treatments throughout.

Stage director Tazewell Thompson from New York completed the opera’s success through his very pleasing distribution of subtle shades of pinks, blues, reds, and blacks throughout the stage set, fabric, props, and lighting. It was almost as if the colour held the key to something important that you wanted, but could never identify. And the performers’ stage movements, unlike most operas, held steady visual interest throughout.

Despite Norma’s predictable similarities to Romeo and Juliet or any one of the Greek tragedies, Bellini’s famed opera impresses due to the group’s successful articulation of its complex lyrical and dramatic subtleties and an overall air of authenticity in character and design that engendered universal human feelings for the viewer.

Prior to the performance Bonynge said of his beloved opera, “If they are not really affected by it, we are not doing our job.”

It would appear that the entire cast, including Bellini, did an exquisite job on this one.

‘Norma’ opened at the Queen Elizabeth Theatre on Saturday, Nov. 28. Remaining performances will take place on December 1, 3, and 5.