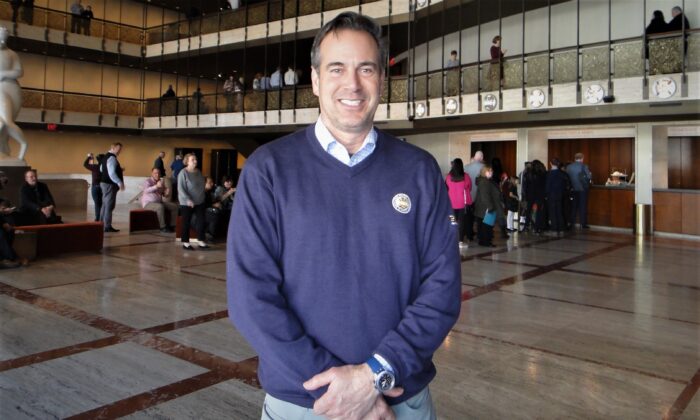 NEW YORK—Golf professional Brian Crowell is used to teaching people how to achieve more fluidity and efficiency in their movement, so he had a nice moment to sit back and marvel at the high-level skill of Shen Yun Performing Arts dancers at Lincoln Center Saturday afternoon, March 7, 2020.

“It’s impressive, it’s powerful and it’s athletic and very, very uplifting,” said Crowell, who is the president of the Metropolitan Section of the PGA, as well as a broadcast commentator, speaker, and radio host on the topic of golf.

New York-based Shen Yun is the world’s premier classical Chinese dance company, having brought a near-extinct art form to the world’s stage in the past decade.

“Incredible talent; it’s kind of surprising to see so many of them, all in tune and all performing flawlessly,” he said.

“It’s a beautiful thing to watch and they all seem to be absolutely masterful at their craft and it’s fun to watch. You can tell there’s a lot of athleticism and artistry out there. It’s quite a combination,” Crowell said.

“I think the biggest takeaway was just the overall production and how well put together it is. It looks like these folks have all been working together for decades,” he said. “It’s just an amazing production.”

Through dance, a unique orchestra blending East and West, and an animated backdrop with patented technology, Shen Yun brings 5,000 years of Chinese civilization to life. For Crowell, it was a learning experience filled with culture and history.

“I was blown away by the choreography, I thought the costumes were just incredible, I’m anxious to see what they come out within the second half,” Crowell said during intermission. “I was overwhelmed with the choreography, and the orchestra too, the music, the visuals—It’s just really kind of a titillating experience. Just all the senses were hit there, so very, very pleased.”

Crowell was not just impressed, but also uplifted by the performance, which is rife with traditional Chinese values in the stories and themes, like wisdom and propriety, compassion, faith in the divine, and integrity.

“There is a very positive feel about the whole production, it kind of lifts your spirits, and there is just a very positive and uplifting feeling that I’m taken with so far,” Crowell said. “Looking forward to the second half.”