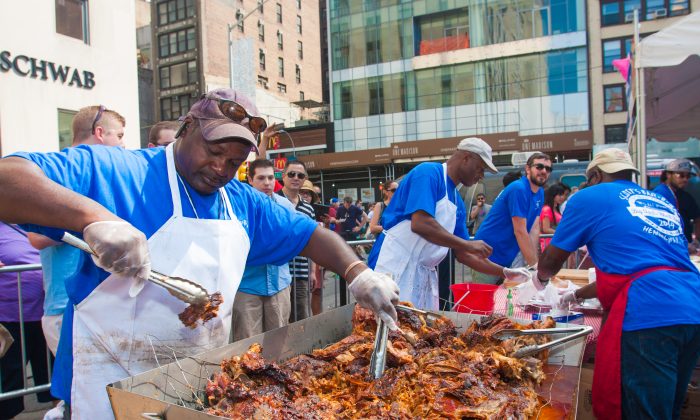 All around there was fire and smoke of the best possible kind, enveloping the masses. The vibe was partly block party, partly refugee camp. Rarely is Madison Square Park so full of bodies vying for their own square foot of green real estate. But no matter: the barbecue was all worth it.

Last weekend’s Big Apple Barbecue Block Party, like every year, receives tons of fans and barbecue lovers, who while in long lines exchange tips for the best ’cue.

In a particularly excruciatingly long line, a fan preached his gospel, “A long line doesn’t mean it’s high quality!” He shot a look at my flimsy plate, “Bread! Throw that out or I’ll throw it out for you!”

Taking his recommendation for a relatively short line but awesome ’cue, we bee-lined it to taste pitmaster Rodney Scott’s barbecue. The hogs cook at about 250 to 300 degrees, for 8 to 12 hours and take constant vigilance. Fat dripping on the charcoal can set the pig on fire, and everything else. He should know: Last year, that’s exactly what happened to his South Carolina cookhouse.

When the hog is ready, the men get to work cutting it up and dousing it with a superb sauce that’s vinegary, spicy, with a hint of citrus (a touch from his own family tradition), which meld right with the moist meat. It’s sublime.

The best part? “The skin,” Scott said without hesitation.

Another ’cue gem: the ribs from Mike Mills’s 17th Street Bar & Grill. The man is the only barbecuer with top-security clearance to board Air Force One. Those presidential folks know their barbecue, is all I can say. One bite and all my thoughts stopped in their tracks. My friend, a ’cue lover, called the ribs “an explosion of subtlety.”

Looking around at families and strangers sitting by side, eating barbecue, talking barbecue, it was hard not to go all philosophical. Bar vegetarians and vegans, well—New York City seemed a smaller, more fraternal place that day.

Animals made an impression, too. Not the hogs, splayed out on the racks, but the dogs.

Gentle dog owners, what were you thinking? The wistfulness in those yearning pooches’ eyes should have been an arrow to your heart. It must have been like standing next to the dinner table, waiting for a child to spill some crumbs, magnified a thousand times.

We did see one pooch munching on a very large bone (possibly from home, brought by a feeling owner.)

At the end of the day, that feeling of the unattainable, ever out of reach, must have taken its toll. We saw one woman carrying her very tired bulldog home. Now, that’s love.