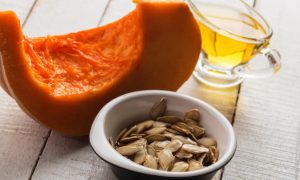 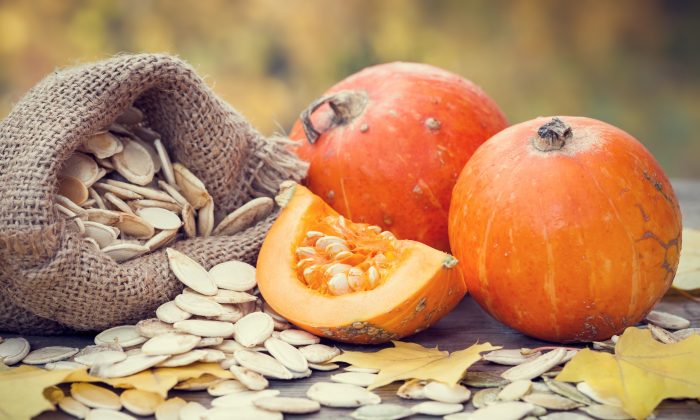 Pumpkin seeds, like all edible seeds, pack an immense nutritional and medicinal punch. After all, they contain future worlds within their compact structure. As Ralph Waldo Emerson said, “the creation of a thousand forests is within one acorn.”

In order to prepare their “babies” for survival outside the pumpkin, Nature equips these seeds with an extremely dense source of organically-bound nutrients, including exceptionally high levels of key, health-promoting minerals.

But beyond the obvious nutritional virtues of the seed, recent scientific investigations have revealed that pumpkin seed meal, as well as its pressed oil, may have great therapeutic value in alleviating the following conditions:

Prostate Growth: pumpkin seed has been studied for its ability to inhibit testosterone-induced prostate growth, a common causative factor in benign prostatic hyperplasia. It was also proven safe and effective in a 2014 clinical trial comparing it to the drug Prozasin, which is often used to treat high blood pressure,  posttraumatic stress disorder, and the symptoms of an enlarged prostate.

Postmenopausal Symptoms: Women supplemented with 2,000 mg of pumpkin seed oil over the course of 12 weeks were found to have reduced blood pressure, increased HDL cholesterol (aka the “good cholesterol”), as well as a reduction in the severity of  symptoms associated with hormone insufficiency, e.g. hot flash, headaches, and joint pain. Additional experimental research indicates that adverse cardiovascular changes associated with estrogen deficiency, such as blood pressure and lipid abnormalities, can be mitigated with pumpkin seed oil.

Calcium-Oxalate Kidney Stones: According to a study performed in 1987 and published in the American Journal of Clinical Nutrition, children with calcium-oxalate crystals (the most common cause of kidney stones) in their urine responded favorably to the supplementation of their diet with pumpkin seeds.

Cardiovascular and Liver Disease: A mixture of flaxseed and pumpkin seed was found to have heart-protective and liver-protective properties in an animal study from 2008 published in the Journal of Food Chemistry & Toxicology.

Drug and Chemical Toxicity: The protein isolate of pumpkin seed has been shown to alleviate acetaminophen (Tylenol) toxicity on the liver, and protect against methotrexate-induced small intestine damage in an animal model. It has also been studied to protect against carbon tetrachloride-induced liver injury.

Arthritis: Pumpkin seed oil was found to compare favorably with the NSAID drug indomethacin in an experimental model of arthritis, but without causing liver damage, in a study published in 1995 in the Journal of Pharmacological Research.

Hypertension: Animals fed pumpkin seed oil were found to respond more favorably to conventional drug-treatment with Ace-inhibitors and Calcium Channel Blockers (with are both used to treat high blood pressure), likely because of its beneficial antioxidant properties.

Insomnia/Anxiety: Pumpkin seeds contain a high level of tryptophan (22mg/gram of pumpkin seed protein), the amino acid precursor to serotonin—which is itself converted to melatonin, the “sleep hormone,” in the evening. Research published in 2007 in the Canadian Journal of Physiology and Pharmacology found that when de-oiled pumpkin seed was taken in combination with glucose, a clinical effect similar to that of pharmaceutical-grade tryptophan was achieved. A 2005 study published in the journal Nutritional Neuroscience found that pumpkin seed sourced tryptophan in combination with carbohydrate was as effective as pharmaceutical tryptophan in reducing awake time during the night.

These, of course, are only some of the experimentally confirmed beneficial properties of pumpkin seed. Like all foods, there are likely countless properties that fulfill Hippocrates’ age-old and timelessly true proclamation that food can be our medicine. Stay abreast of new research on pumpkin seed oil and other pumpkin components on our database dedicated to the topic: Pumpkin Research.