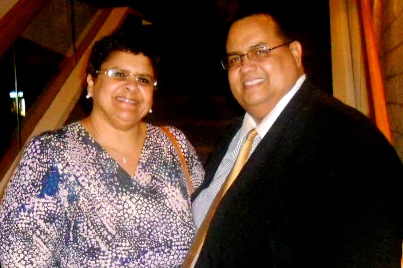 FORT MYERS, Fla.—At Shen Yun’s opening night, one executive was astonished. “Fantastic, amazing, amazing—the dancing the music, the history, the songs, the actual words of the songs. The meaning is so significant. It was absolutely amazing! I can’t describe it in any other way,” Bob Encarnación said.

Mr. Encarnación, publisher of the weekly Hispanic newspaper Imagen Semanal, saw the March 30 performance at the Barbara B. Mann Performing Arts Hall along with Maria Sanchez.

“Chinese dance is at the heart of what Shen Yun does,” the company’s website states. Chinese dance includes classical, folk, and ethnic dance. Classical Chinese dance “involves learning combinations of leaps, turns, flips, spins, and other aerial and tumbling techniques. It is a vast and independent system of dance,” according to Shen Yun.

Animated digital backdrops extend and transform the stage. “These digital backdrop designs complement and synchronize all aspects of the performance: the characters, color of the costumes, specific dance movements, props, lighting, the story being told, particular notes played by the orchestra, and special audio effects,” the website states.

“The culture is beautiful,” Mr. Encarnación said. “I think the greatest part of the show is the fact that it really highlights the culture that most Americans don’t know and don’t see. So I think it’s great that [the artists] are bringing and highlighting the Chinese culture. Unfortunately, a lot has been lost because of the communist rule.”

Established in 2006, Shen Yun aims to use the performing arts to revive the traditional Chinese culture, with its belief in the divine and traditional principles such as benevolence, justice, propriety, wisdom, and divine retribution. Communist regimes have all but destroyed this ancient culture through campaigns like the Cultural Revolution that aim to replace China’s true culture with communist culture.

“I hope they [Shen Yun] continue to do the shows and continue to share the culture with all of us, Mr. Encarnación said.

‘The Message of Hope’

“I thought there was a divine message behind [the performance]. When the sopranos were singing, you felt it, but when you’re reading the words, you see the reason—what the message is, the message of hope. You know that there’s been suffering, and there’s been bad, but the world will turn around. We can’t do it ourselves, that’s for sure.”

She said that seeing the performance made her feel very emotional. “It was just a stunning time. I highly recommend it to everyone,” she said.

Mr. Encarnación said he would tell people, “Come and see the show. I’m going to go back home and put it on Facebook and tell everybody, ‘You got tomorrow, two shows, 2:00 and 7:30.’ So we’re hoping they will come,” he said.