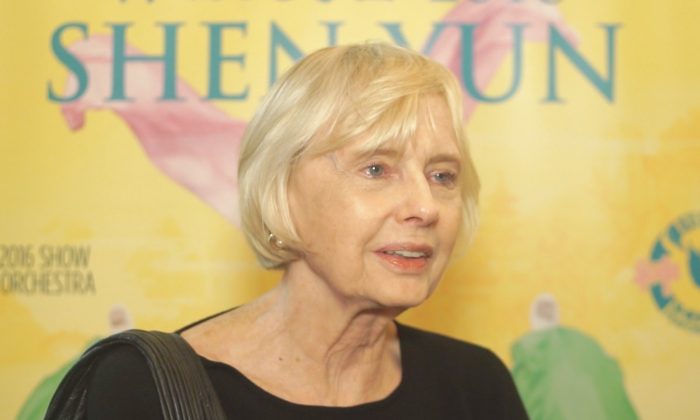 “It’s a sharing of the culture and the stories along with it that make [Shen Yun] delightful,” Ms. Miller said.

“The stories were beautiful. They reminded me of fairy tales we learned as children, from a different continent of course,” Ms. Miller said. Although differing vastly in content, the stories featured in Shen Yun’s performances offered universal themes present within the stories of peoples around the world.

A New York-based performing arts company, Shen Yun brings audiences on a journey through thousands of years of Chinese civilization and traditional culture, letting viewers experience firsthand the ancient stories and legends at the heart of Chinese culture.

Greatly appreciative of Chinese culture, Ms. Miller was surprised and saddened when she realized Shen Yun did not come from China. She had visited China around the year 1985 as the Cultural Revolution was ending and had assumed the suppression of Chinese traditional culture would have loosened over the past few decades. It disappointed her to realize this was not the case, and she appreciated Shen Yun for sharing China’s traditional culture with audiences here.

Besides the cultural connections, Miller also enjoyed Shen Yun for its beauty and energy.  She particularly appreciated the youth and vigor of the performers. “I thought they were flying,” she said, describing the vibrant energy of the artists on stage as they seemed to effortlessly perform difficult techniques.

A key aspect of classical Chinese dance is the technical skill, which includes high-level jumping, turning, and flipping techniques, according to the Shen Yun website. Although many people believe these difficult tumbling skills stem from acrobatics, many of them actually originate from classical Chinese dance.

I shared the joy of the dancers.
— Bonnie Miller

The lightness and joy of the Shen Yun performers touched Miller and uplifted her own emotions. As she watched the artists on stage, she said, “I shared the joy of the dancers.”