Psychology Student: At Shen Yun, ‘I Connected to the Divine’ 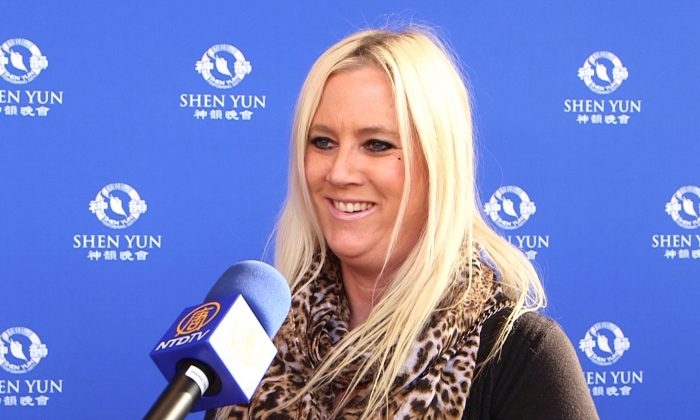 Terri Thomson at the Terrace Theater, on the afternoon of March 19, felt connected to Shen Yun and said, "Chinese beliefs are really pure and they’re not really of this world." (Courtesy of NTD Television)

LONG BEACH,Calif.—”Absolutely mind blowing. Amazing! I’ve wanted to see this performance ever since Shen Yun started. And I finally get to see it in 2016,” said Terri Tomson at the Terrace Theater on the afternoon of March 19.

“I was so moved. I could feel the hairs on my arms standing up and could feel (in) my body, I connected to the divine!”

Ancient Chinese culture created a rich tapestry of art inspired by the divine. Shen Yun’s website provides insight into the connection between art and the heavens. “Throughout history almost every culture looked toward the divine for inspiration. Art was meant to uplift, bringing joy to both the people who created and experienced it. It is this principle that drives Shen Yun performers and their art.”

According to Shen Yun’s website, its source of inspiration is rooted in the spiritual discipline known as Falun Dafa, a self-cultivation practice based in the Buddhist and Taoist principles of truthfulness, compassion, and tolerance.

Chinese philosophy, and a holistic approach to life have always resonated for Ms. Tomson.

“I love how the Chinese perform. I love their practice of Buddhism, how they teach you beautiful qualities, and so I’ve wanted to be a part of Shen Yun. I got to,” she said.

Ms. Tomson added, “Behind every life lesson is something that’s philosophical that one should practice and I just, I can’t really put into words how to explain [it]. But the Chinese beliefs are really pure and they’re not really of this world.”

“So they exhibit ways to live by that I believe everyone should live by.”

Ms. Tomson felt a deep connection with everything she experienced at the performance. The Shen Yun Orchestra, which blends Western and Chinese instruments into a unique musical event enhanced her feeling of being connected.

Ms. Tomson has been inspired by ancient Chinese medicine, philosophy and poetry since she was a child. She has a deep belief in reincarnation, and feels she was once Asian.

“It’s something I connect to. It’s beautiful,” she said, “I try to embody the life lessons that you learn in Chinese medicine, Chinese philosophy, Chinese poetry. And now I get to see Shen Yun, Chinese dancing, and performance, and it’s absolutely, absolutely wonderful!”

“Their performances are just so superb. They’re in sync, they’re uniform. There’s not one mistake, when you’re watching all of them, you just see perfect synchronicity.”

“Perfection. That was amazing! And I was definitely moved,” she added.

Her family and friends will receive a glowing account of Shen Yun Performing Arts, as well as a heartfelt recommendation that they would enjoy a Shen Yun performance.

“I’m going to tell everyone because it’s not your typical performance. It moves you in ways that other Western performances don’t move you,” she said.

“Something about the ancient art of [the] Chinese, it takes you back into worlds that you didn’t know existed. So when you go down on those paths, you’re moved in multiple ways, sometimes you’re moved in subconscious ways you won’t know until one day you realize, you go ‘you know what, I remember how I got that lesson,'” she said.

“I want to thank Shen Yun for coming aboard. I wanted to see Shen Yun for so many years,” she said. “It’s taken me this long to come, and I’ve definitely become a lover, and I’ll be back next year. I can’t wait!”