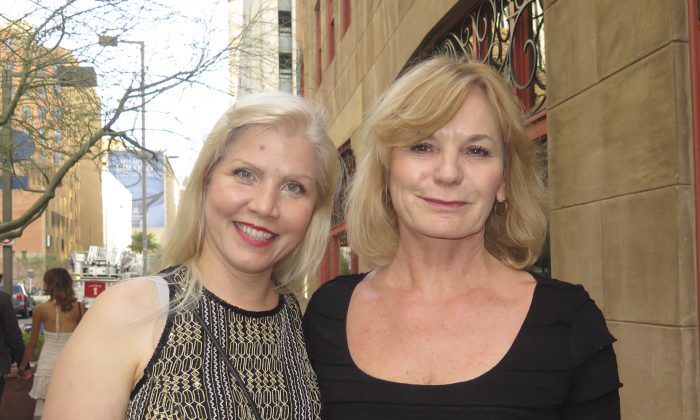 “It gives several positive messages: tolerance, acceptance, freedom of speech, freedom of religion, freedom to be whoever you want,” said Dr. Heathcote after watching the performance.

New York-based Shen Yun is the world’s premier classical Chinese dance and music company, formed with a mission to revive 5,000 years of divinely inspired culture that has been all but lost under the current atheist communist regime in China.

“Sophisticated dance techniques, an orchestra joining instruments from both the East and West, beautiful costumes, and a stunning backdrop—this is Shen Yun at first glance. But digging deeper, one discovers a sea of traditional Chinese culture. Mortals and divine beings merge on stage as one. Principles such as benevolence and justice, propriety and wisdom, respect for the heavens, and divine retribution, all come to life, washing over the audience,” according to the Shen Yun website.

Dr. Heatcote is a licensed clinical psychologist and CEO of Ahwatukee Psychological Services, PLLC. She has spoken on the topics of depression, anxiety, autism, and motivation at national conferences and to general audiences.

Some of the pieces in Shen Yun deal with China today, particularly the persecution of Falun Dafa, a meditation practice based on traditional Chinese culture. Practitioners of Falun Dafa within China have faced brainwashing, torture, and even death since 1999.

Being a German native, Dr. Heathcote saw the similarity between the current Chinese regime and historical Germany while watching the performance. “This has so much meaning to me because historically, Germany has fought their own demons with regimes, Nazis, and so on.”

The stories of Shen Yun are told with classical Chinese dance, a rich art form developed over the millennia of Chinese culture.

“China’s deep cultural traditions are contained in classical Chinese dance, allowing its movements to be richly expressive, such that the personalities and feelings of characters can be portrayed with unparalleled clarity. It is therefore capable of depicting scenes from any time period, whether ancient or modern, Eastern or Western, in a strikingly vivid way,” according to the website.

“I’ve been here [in America] for many years, but I still have my own cultural identity with some respect, and I am very open and tolerant to other cultures,” she said. “I believe I should accept everybody for who they are. I think this whole thing about spreading the message that we need to all recognize that one, there is a problem; and two, we need to work together to come up with some solution, not to tolerate bullies.’

Dr. Heathcote continued, “There needs to be a solution to the problems that are going on in the world. Stop the violence; hurting, injuring, killing people, for their pursuit and their happiness, or be who they want to be, and learn what they want to learn, to pursue their religions and beliefs.”

“And compassion for other people, and to be good,” added Stephanie to Dr. Heathcote’s comments.

She explained how Shen Yun inspired her. “At first, the emotions are inspired by what you visually see, what you hear, and the choreography of the show; the talent of the performers was exceptional; the music was just enormous,” said Stephanie. “I have very much respect for that culture.”

Shen Yun deeply touched Stephanie. She said that she, too, had cried during the performance.

“Very sad,” she said, about modern China and the persecution against Falun Dafa practitioners. “They are suffering, so many people, such a peaceful people are suffering with such hardship, not being able to express their traditional ancestral ways, because of control that people are putting upon them.”

Stephanie said she would tell everyone that Shen Yun is amazing, and that they need to go see it.

“I would see it again. If it comes back to Phoenix, I will see it again,” said Dr. Heathcote.