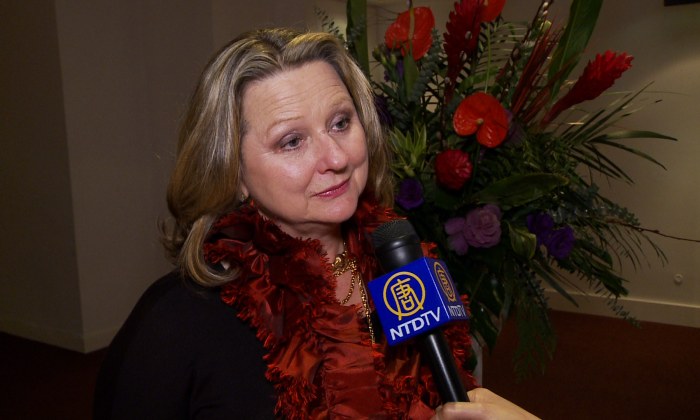 TORONTO—Award-winning television director, producer, and writer Theresa Kowall-Shipp is an expert in delivering solid entertainment and she thought Shen Yun Performing Arts was as well.

“The performance is much more than I expected,” she said. “It is truly beautiful.”

“I think, having been a dancer at one point in my life, I can appreciate the amount of effort that these performers have gone through. This company is rehearsed impeccably,” she said.

“To be so beautifully in unison, for the dancers to feel each other and to work together so seamlessly is so much more challenging then you can imagine unless you have been, literally, in those shoes.”

She has worked across many genres and was the original creator of Recipe to Riches, senior producer for Christine Cushing Live, and writer, producer, or director for many other programs that have aired on CTV, CBC, Global, YTV, WTN, The Travel Network U.S., LIFE NETWORK, HGTV, Food Network Canada, BBC, Discovery, Bravo!, and Discovery Kids.

She is currently producing and directing a six-part documentary on Chinese food in North America, an experience that has exposed her to the richness of Chinese culture.

“A lot of people are not aware of the incredible depth of the Chinese culture and also how it’s intertwined with the rest of the world for generations and generations, centuries really.”

Shen Yun was founded on a mission to revive China’s divinely inspired culture, a heritage that spanned 5,000 years. After the communist regime came to power there in 1949, much of that culture was systematically destroyed.

But culture is essential to humankind, and as someone that helps express that culture Ms. Kowall-Shipp had a definite affinity for Shen Yun’s mission.

She found the idea that traditional Chinese culture and beliefs were being lost in China to be a real loss.

“It’s very sad to me to think that that might be what is happening in China right now. I certainly hope, like the dance we saw tonight where the young dancer is aspiring to take his art back to China, I certainly hope we get a chance to see that in our lifetimes.”