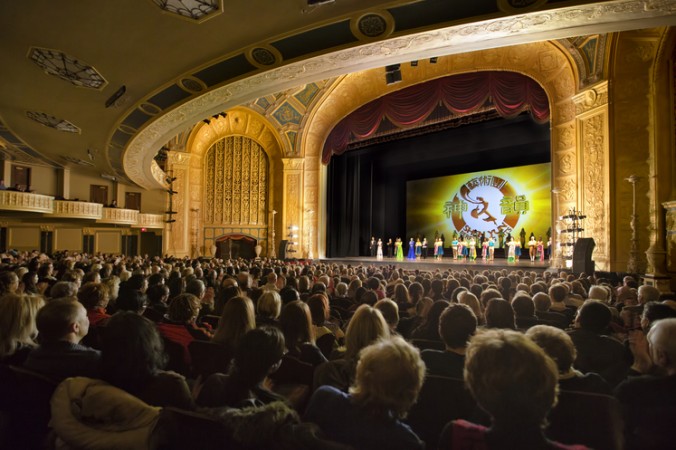 DETROIT—Divine love, despite the sadness of our times, offers hope to humanity. This is the message that Shen Yun Performing Arts brought to the Detroit Opera House during its run Feb 6-8.

Shen Yun Performing Arts Touring Company, based in New York, presents traditional Chinese dance and music. It aims to revitalize the arts and culture of ancient China, a culture thought to be divinely-inspired.

Both classical Chinese dance, which is used to depict legends as well as tell stories from China today, and folk and ethnic dances, are showcased in 20 or so short programs. Award-winning vocalists enrich the evening, their lyrics adding insights into Chinese values.

It might seem surprising that a program about ancient China could bring people hope today, but it has.

Celia Livermore, a professor of information technology at Wayne State University, said: “I could see the constant emphasis on conflicts in war, hatred, but on the other hand, the redemption through love. There was the attempt by the loving group of people to redeem the conflict and the anger and the hostility that came from other sources. I was very impressed.”

Her husband, Bill Callahan, a Wayne County judge, agreed. He felt the whole performance was enlightening and could be so for everyone.

“On one hand, there was an emphasis on conflict, lies, … things like that,” Ms. Livermore said. “But on the other hand, there was a sense of hope that peace, love, can conquer, can overwhelm the forces of evil. And that’s a message that we need to hear at this point in history, I think.”

The couple would absolutely recommend Shen Yun to others. They commended the artistry, with Ms. Livermore saying the beauty was “absolutely overwhelming.” The couple had traveled all of China and had seen dance there as well, but found this performance much better.

“My husband was telling me as we were watching it, ‘We should come again.’ So we are planning to come again, definitely,” Ms. Livermore said.

Another couple seeing the performance felt it was “absolutely incredible.”

Erica MacDonald works for the University of Michigan at the Institute for Social Research. She attended with Chris Spice, a financial planner for MetLife.

Several of the dances depict an ongoing persecution in China by the communist regime of people of faith.

For Mr. Spice, a Christian, the hope comes from acknowledging the spiritual side of existence. He appreciated and had a freeing feeling related to the universality of core beliefs presented by Shen Yun: “It tells us that everybody knows that there’s this wonderful God that loves us, and hopefully, we can all be free to express ourselves through, whether it be art, or dance, or music.”

Attending Shen Yun on Feb. 8 was Andrew Paberzs who felt the performance uplifting and “truly an expression of [the] divine.” Mr. Paberzs works for the University of Michigan Health Systems and has practiced qigong for a decade or more.

“There’s a melancholy sadness to the reality of the world as it is today,” he said. “And so it’s uplifting that I can at least experience this beauty here now.”

It was difficult for him to comprehend that Falun Gong, a group that practices peaceful meditation, is persecuted in China today.

“I don’t want to hear about any more persecutions. I just want to love and do the right thing, you know?” he said.

He’d wanted to see Shen Yun for years, and finally getting the chance, he felt it was really meaningful for him.