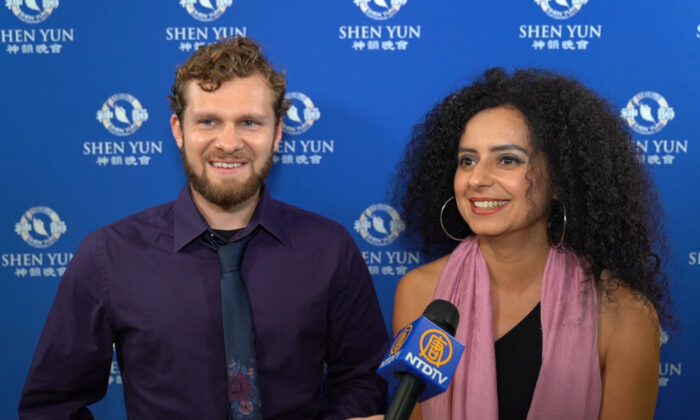 Rich Chiovitti and Neggaz attended Shen Yun Performing Arts in Venice, Florida at the Venice Performing Arts Center on March 13, 2020. Professor Neggaz said she would recommend Shen Yun to all of her colleagues at the college where she teaches history. (NTD Television)

VENICE, Fla.—When the final dance ended and the curtain fell, two Shen Yun Performing Arts audience members didn’t want to leave their seats at the Venice Performing Arts Center in Florida on Friday. They had forgotten all about current world events and had got caught up in the positivity and beauty of the classical Chinese dance performance from New York.

“Overall, it’s just everything—from the color, the lights, and the spirit—the spirit is very positive. Very, very positive. And the ending! The ending is basically they were all saved, right?” Neggaz said. The final piece among the songs, stories, ethnic and folk dances in Shen Yun‘s performance depicts an ancient Chinese legend about the Creator and His return to earth to help mankind.

“That’s the part we didn’t want to end,” said Neggaz’s friend, Rich Chiovitti. “We were like ‘We have to go? Okay, fine, we will go, on our own. But next time we will be here.'” Chiovitti and Neggaz attended Shen Yun on March 13, 2020, in Venice, Florida.

“This is why the songs and of course the performances were so aligned because the song was about those who will be saved and in the end, you see God in the background and everything is fine,” Neggaz added, drawing a connection between two of the roughly 20 vignettes in Shen Yun, all of which are based on authentic Chinese cultural beliefs and designed to revive traditional Chinese culture, which was steeped in divinely-inspired practices and convictions such as Buddhism and Daoism.

“Right now I teach a course on the Mongols,” Neggaz said, “So I was really interested in the aspect of the performance of Mongolia. With all the traditional horses, and steppe life, and nomadic aspect.” As Shen Yun’s artists breathe new life into traditional Chinese culture, they draw inspiration from ancient dynasties, historical legends, and the many ethnic groups that made up the Middle Kingdom.

Neggaz appreciated the variety and soul of each piece and even recognized the individuality displayed by each dancer.

“I really like the styles and I thought that the elegance, and also the different styles of each dancer, I thought that each had their own features, characteristics. And I also just liked how it sort of told you a story. We also had the comments from the speakers [the emcees] who introduces each bit of dance, and I thought this was useful,” she said.

As for how deeply spiritual authentic Chinese culture turned out to be, as well as Shen Yun’s portrayal of it, “I was a little surprised actually. I didn’t expect such emphasis,” Neggaz said. “All the performances actually had that aspect of God and divine values. There was this strong message throughout, and there were also comments about communist China and the fact that there is repression and so on.”

Shen Yun includes stories drawn from present-day China where a brutal persecution is taking place against those who wish to carry on China’s spiritual traditions and practices, especially practitioners of Falun Dafa, an ancient meditation practice that includes moral teachings.

About the songs sung by specially-trained bel canto soloists, Neggaz liked them a lot. “Both were incredible. I wish the performances were longer actually! They felt a little short.”

From the songs to the dances to the brief additions by the emcees, Neggaz and Chiovitti felt a pervasive sense of soulfulness and positivity throughout Shen Yun’s performance. This, Neggaz said, actually parallels how she views the world at large.

“I think that spirituality in my sense is everywhere. Now, so many people do yoga, meditation, and perhaps they are trying to detach it from the divine, they don’t call it spirituality, but a lot of it is actually. I mean, I personally, for me spirituality is very important in my daily life. It’s helping me to be positive and to keep going, so I personally think it’s a big part of my life,” she said.

“She helps shape people through teaching. But me, I am more of a caretaker, so spiritually, you have to be present in both our professions. It’s definitely a big part of the life and lifestyle,” said Chiovitti, who works as a nurse.

Neggaz felt that the final piece of the evening, which had the most overt reference to the Creator, gave a strong sense of hope and optimism. “Yes! I am personally a rather positive person. I look at the glass half full. But yes, what I take from the performance is definitely the positive end. It’s very optimistic.”

“I was very pleased with the performance. Thank you!” added Chiovitti.

“Actually I will talk about [Shen Yun] especially with my colleagues who do Chinese language, culture, or history,” Neggaz said, “because I think they could have their students come here and watch it, or maybe next year, too … I also very much like the dresses, the costumes, the colors. Everything was very graceful.”

The professor’s final thoughts turned into a type of happy assignment regarding Shen Yun for her friends, family, and colleagues: “Come see it!”