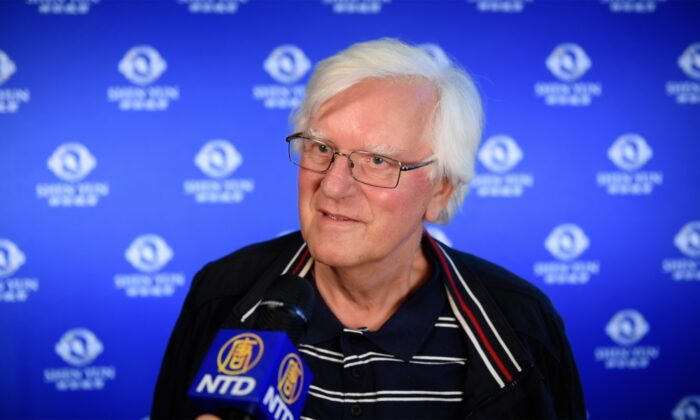 Gabriël Moens AM, an emeritus professor of law and former pro vice-chancellor at Murdoch University attends Shen Yun Performing Arts at the Home of the Arts (HOTA) on the Gold Coast, Australia, on May 8, 2022. (NTD)

GOLD COAST, Australia—Gabriël Moens, an emeritus professor of law at the University of Queensland and Member of the Order of Australia (AM), one of Australia’s highest honours, said he admired the skills, abilities, and enthusiasm of the performers in Shen Yun Performing Arts.

“The performance was absolutely dazzling,” Professor Moens said after watching Shen Yun perform at the Home of the Arts (HOTA) on the Gold Coast on May 8.

“It [influenced] me emotionally and physically because it lifts your spirits, it revitalises you.”

Through a series of story-based vignettes, the New York-based company showcases stories of courage and sacrifice, integrity and loyalty, compassion and virtue, from ancient China through to modern times. Alongside Shen Yun’s virtuoso performances, these vignettes are accompanied by Shen Yun’s original orchestral arrangements that blend Eastern and Western instruments, all cast against Shen Yun’s state-of-the-art animated backdrops.

“The stories were introduced very well,” Professor Moens said. “They were about spirituality, the history of China, the great ideas from China, and I think eventually people will benefit from coming to these performances.”

Professor Moens said the company’s mission—which is to revive the traditions and wisdom from China’s 5,000 year old civilisation—told a great deal of the history of China, particularly before communism.

While Shen Yun cannot yet perform in China due censorship as well as the communist regime’s destruction of traditional culture, Professor Moens said it shows that “freedom of choice is adversely and dramatically affected by an evil regime.”

“[I]f a company of this nature is able to bring so much joy into the lives of people, they should be able to perform everywhere in the world,” Professor Moens said, adding that the “day will come” when Shen Yun will be able to perform in China.

“It was the best performance I had seen since a long long time and I will tell people my experiences today and I hope to be back in the future.”

“I’m finding out parts about China that I didn’t know, and I think in light of everything that’s been happening, it’s really timely and really beautiful for us to be able to see how beautiful the tradition is, and how deep it really goes and how far back it is. It’s beautiful,” Ms. Smith said.

Shen Yun’s costumes and bright colours are based on traditional aesthetics and styles, according to the company’s website.

The ancients believed that Chinese attire was inspired by the heavens, which were reflected in China’s different dynasties, regions, and ethnic groups.

“The fabrics are exquisite. The movement of the fabrics … how light they are. I can see there’s been a lot of thought put into the costumes,” Ms. Smith said.

Ms. Smith said that the “Water Sleeves” vignette—showcasing the grace of ladies of the imperial court dancing with flowing sleeves that ripple like water—brought tears to her eyes.

“[T]here’s so much finesse in the way that all of the dancers are moving and the costumes are exquisite.”

‘Music Is So Healing For the Body’

Coupled with the dancers and the animated backdrop, the performance provides a feast to all the senses.

“[T]here’s something that’s really special when you’re seeing the dancers smile on stage when it’s coming from the heart,” said former professional dancer, Yvonne Tribe, who was also in the audience.

“Even when I was watching [the erhu soloist] play the instrument, straight away, my eyes welled up with tears and I could feel it deep into my heart … It just moved me right into my soul.

“Music is so healing for the body,” Ms. Tribe said.

Shen Yun’s music is arranged based on the five notes of the pentatonic scale. Each note is said to relate to one of the five elements, as well as one of the five major organs of the human body. Hence, the ancient Chinese believed that listening to harmonious music could harmonise a person’s mental and physical well-being.

Melinda Keith, former Physical Culture Champion who has a background in allied health, also resonated with the music of Shen Yun.

“There are a few scenes in there with the different hertz of music, and it actually affects our emotion and our spirits,” Ms. Keith said.

“It’s so ethereal, it takes you to another place.”