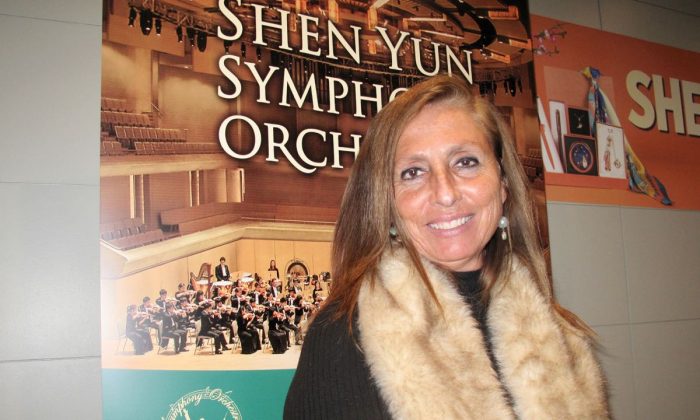 WOKING, United Kingdom—Professor Josefina Ramirez wasn’t only impressed by the Shen Yun dancers’ physical abilities. She was deeply moved by their spiritual beauty too.

“The abilities and spiritual beauty that come from the dancing really comes across,” said Ramirez, who attended Shen Yun in Woking’s New Victoria Theatre on Jan. 10.

“It makes it even more meaningful than only plain dancing. It comes out with spirit,” she said.

Thousands of years old, Classical Chinese dance is one of the most expressive art forms in the world.

Shen Yun, a company based in New York, has a mission of reviving authentic Chinese culture on stage through dance and music.

“We hear about it but then the history kind of washed it away so it’s very nice to recuperate it and bring it back and see it in a real performance,” said Ramirez.

Under communist rule in China, traditional moral values have been suppressed and almost wiped out. Shen Yun depicts ancient stories passed down through Chinese history and brings these values back to life on stage.

“It’s so good it comes with a message on how people are living in China and how they could live if they had more freedom,” she said.

She was referring to the story, “Goodness in the Face of Evil,” which is about Falun Dafa, a spiritual discipline that has been persecuted in China under the communist regime since the late 1990s.

She was particularly touched by the values portrayed in the dances.

“The values of tolerance and spirituality come across very clearly—and how a very peaceful way of living spirituality should be kept and should be maintained and protected,” she said.

Ramirez added that the energy from the performance was incredible.

“You can see all the smiles and real energy that comes out from every performer. Lots of energy from every one of them and passion for what they are doing, you can tell. Lots of humor but with a deep sense as well,” she said.

With reporting by Xiaomin Pang and Jane Gray.